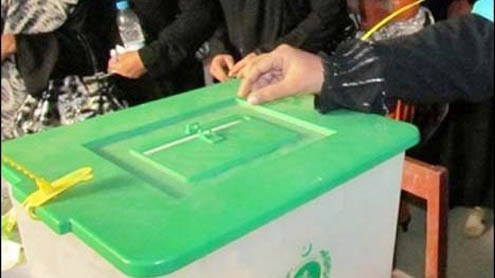 KARACHI: If unofficial results of Thursday’s by-election in Sindh are to be believed, the people of Sindh seem to have repeated the May 11 history by putting much of their electoral weight behind the Pakistan People’s Party (PPP) and the Muttahida Qaumi Movement (MQM).

Acting Chief Election Commissioner Justice Tassaduq Jilani visited various polling stations in the city and chaired an ‘introductory’ meeting at the office of Sindh Election Commissioner SM Tariq Qadri. The CEC declared the overall polling process in the province satisfactory.A bomb attack on an army vehicle, killing two, including an army man, and wounding 15 others in Korangi No 5 area was the only incident underlining the volatility of the violence-hit city.

While the Pakistan Muslim League-Functional (PML-F) seems to be hopefully counting on its spiritual vote in Sanghar, the Pakistan Muslim League-Nawaz (PML-N) and the Pakistan Tehreek-e-Insaf (PTI) seem less likely to grab more of the representational fruit from the province, a traditional PPP stronghold.According to officials at the Sindh Election Commission, balloting started at 8am at almost all 1,184 polling stations set up by the Election Commission of Pakistan (ECP) for holding by-elections in NA-254 (Karachi), NA-235 (Sanghar), NA-237 (Thatta), PS-103 (Karachi), PS-95 (Karachi), PS-12 (Shikarpur) and PS-64 (Mirpurkhas).

The voter turnout remained low across the province. “The polling process, especially in Karachi, is very slow. It, however, is likely to gain momentum after 4pm,” an ECP official said.The 30 percent unofficial vote-count puts the PPP and MQM, former allies in Sindh and the Centre, ahead of all others. The PPP is, reportedly, leading the vote-count in Thatta’s NA-237, Shikarpur’s PS-12 and Mirpurkhas’ PS-64 while the MQM has an upper hand in NA-254, PS-95 and PS-103 in its traditional stronghold Karachi.In NA-254, Muhammad Ali Rashid of the MQM is reported to have received 7,865 votes as compared to 1,225 votes of Muhammad Naeem of the PTI.

In PS-103, an MQM stronghold that fell vacant after the murder of its MPA Sajid Qureshi, Rauf Siddiqui (of MQM) swept the by-polls by bagging 24,938 votes against 2,684 of PTI’s Sultan Ahmed.Muhammad Hussain Khan of MQM is in a dominant position in PS-95 by bagging 47,274 votes against 1,254 of PPP’s Muhammad Jamil Zia.Fight for NA-235 of Sanghar is so far going neck-to-neck with Khuda Bakhsh Dars of the PML-F leading with 27,030 votes against 24,559 of PPP’s Shazia Marri.

In Thatta (NA-237) PPP’s elderly female candidate Shamusun Nisa Memon, mother of former MPA Sadiq Memon, is much ahead of PML-N’s Syed Riaz Hussain Shah with 78,778 votes. Shah has received 48,513 votes.A tough fight was being expected between arch rivals, PPP and PML-N in PS-12 (Shikarpur) but the incomplete results show Ameer Ali Jatoi, an independent candidate, giving a tough time to PPP’s Abid Hussain Bhayo. The PPP candidate is reported to be in a leading position though.

In PS-64 of Mirpurkhas, PPP’s Abdul Saeed Qureshi and MQM’s Dr Zaffar Ahmed Khan Kamali are facing each other off by bagging 15,102 and 14,868 votes respectively.The ECP officials, however, termed the unofficial results “media’s ‘run for your life’ approach”. “These results are sort of run-for-your-life the TV channels are indulging in,” said an ECP official, wanting not to be quoted by name.“Nothing is clear about the result so far,” the official said.

The visiting CEC was happy with his provincial election staff for conducting the country’s biggest by-polls smoothly. “The CEC expressed satisfaction over the conduct of polls in Sindh,” an ECP official told Pakistan Today.Soon after his arrival in the metropolis, the CEC visited various polling stations in PS-103 to personally observe the polling process. “At AzeemSchool polling station in North Nazimabad a group of PPP activists, enraged over the alleged rigging, protested in front of the CEC.”

“He asked the election staff about any pressure they were facing but nothing abnormal was brought to his notice. The army too was deployed there,” said an eyewitness.Earlier in the day, a PTI spokesman claimed that unidentified armed men opened indiscriminate firing at his party’s polling agent in NA-254’s Zia Colony polling station. The agent, the spokesman said, narrowly escaped death as the law enforcement agencies were nowhere to be seen.Also, the spokesman claimed that armed gunmen took hostage the party’s polling agents at polling station number 68 in Nasir Colony.

The PTI spokesman also claimed that security protocol for his party candidate for PS-103, Sultan Ahmed, was withdrawn at around 12:30pm.The ECP officials also conceded to having received at least nine complaints from across the province.Meanwhile, PTI leaders MNA Dr Arif Alvi and MPA Samar Ali Khan, visited various polling stations of NA-254 and PS-103 and appealed to the voters to come out and vote against terrorists, extortionists and “thappa mafia”.The voters, as the partial results show, did not seem to have responded positively to the PTI leaders’ call.