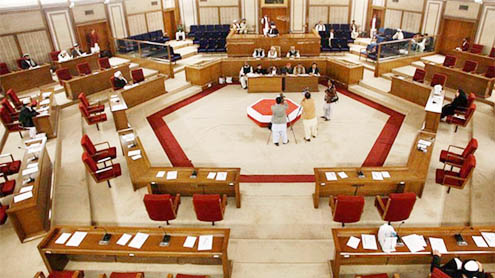 QUETTA: The Balochistan Assembly condemned on Thursday the energy crisis in the province which had affected standing crops and orchards causing billions of rupees worth of losses to growers.

The lawmakers asked the government to investigate the reasons for erratic supply from the Habibullah Power Plant, claiming that Wapda management was receiving money to provide 124MW, but was providing only 80MW.They condemned Wapda authorities for not providing the required electricity to consumers and said that 17 districts were getting only one-hour electricity a day.They said that less supply of power to farmers had badly hit the agriculture sector.

Chief Minister Dr Abdul Malik Baloch said the energy crisis was an important issue and informed the house that he had taken up the matter with the Council of Common Interests.He said he had also urged Prime Minister Nawaz Sharif to purchase 1,000MW from Iran to get rid of breakdowns and loadshedding.He said regular power supply would ensure rapid economic progress in the province.

The chief minister informed the house that the department concerned of the federal government had assured him that work on Dadu-Khuzdar and Dera Ghazi Khan-Loralai transmission line would be completed by December.He said the delay in the completion of work on both transmission lines had been caused by import of required equipment and other material from abroad. – Dawn