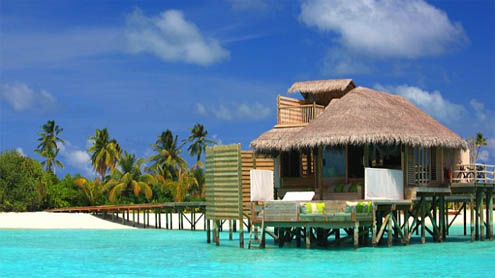 Cloudy skies and city lights make starry nights in London a rarity, so seeing clear skies on holiday is always a welcome sight. I usually end up craning my neck because I’m so taken aback. It’s mesmerising.

I had no idea that the Maldives is one of the best places in the world for stargazing. Isolated in the heart of the Indian Ocean, its inky-black skies are miles away from light pollution, making it a perfect place for appreciating the night sky.

Grazing the Equator, the Laamu atoll – one of the most southerly islands in the Maldives chain – has a clear horizon and great visibility. So much so that astrology expert Dr Parag Mahajani visits the Six Senses resort in Laamu twice a year to host stargazing – and solar-gazing – sessions on the beach.It was late but still wonderfully warm when I arrived in the Maldives capital, Male. From there I boarded a small twin-propeller plane for an hour-long flight south, then took a speedboat to Six Senses, where staff immediately explained the resort’s barefoot policy. Flip flops were duly discarded for the rest of my holiday.

After what seemed like a never-ending winter in Britain, I really couldn’t wait to feel the sun on my skin again. My visit coincided with the dry season, but because the Maldives are so exposed, my instinct as a weather forecaster was to expect a few showers. Just like our own unpredictable weather, Maldivian seasons don’t always go to plan.I got lucky, though. It was blissfully sunny and hot throughout my stay, but coastal winds and a few clouds prevented it feeling uncomfortably so.

Despite feeling a little tired and grubby from the journey, I was determined to join Parag and his group of stargazers on the beach on my first night – and it was certainly well worth the effort. With the naked eye, the skies were clear enough to see well-known constellations including Orion and the Bear at a slightly different orientation than in northerly latitudes.Instead of the North Star, the Southern Cross and a cluster of stars called Seven Sisters dominated the sky.

It was my first time looking through a proper telescope – it was powerful enough to see Jupiter and the craters on the Moon. Every so often the telescope, set up on a tripod in the sand, was adjusted to keep track of the Moon. It was very slowly changing position as our planet moved.

The sight was addictive. Each evening I saw the same people huddled around the telescope, and Parag took time to answer everyone’s questions, no matter how basic they seemed. One evening there was an unexpected talk and slideshow on the colour of stars. We were hooked.Along with mountains of Chile and deserts of Namibia, Laamu is one of Parag’s favourite locations. ‘It’s a special dark place, a boon for stargazers,’ he said. It certainly felt special standing barefoot in the sand on a warm, humid night staring at the endless canopy of stars.

Those who were extra keen had the option to arrange an early-hours private stargazing session to see Saturn and the vast Milky Way from the balcony of their room.Each morning after breakfast there was also the chance to go solar-gazing. This was completely new to me – I didn’t know it was possible to stare at the Sun. Looking through the telescope, the Sun was a fiery, glutinous mass, complete with fine, wispy solar flares and dimpled, dark spots. I learnt that each sunspot was actually a magnetic explosion the size of our planet, and it’s these explosions that cause the Northern Lights. It was fascinating.

Although most evenings and mornings were taken up with my new-found hobby, I thought I might be a little stuck for ideas on what to do during the day. It didn’t help that as a solo traveller, I was expecting to be the odd one out, surrounded by honeymooners staring dreamily into each other’s eyes.Of course there were plenty of newlyweds in Laamu, but there were also a few mothers and daughters, some young families and also a trendy gay couple from Paris. With plenty of activities to choose from, Six Senses is a great place for solo travellers. All the staff are welcoming and approachable – in fact it was impossible to pass anyone without them saying hello.

All the workers live on the island too, so it felt as if they had formed a huge, extended family. There was a happy atmosphere about the place.I was so active that I didn’t even finish reading the first chapter of my book. When I did manage to pick it up, the scorching sun melted the glue binding, meaning I lost a few pages in a gust of wind on the beach one afternoon. It was a sure sign to give up.

There was a strong eco-friendly theme throughout the resort – much of it was constructed using natural, sustainable materials. My home for five nights was a traditional, wooden ocean villa. Perched on stilts off one of the main jetties, the villa was far bigger – and more luxurious – than my one-bedroom flat.When I first opened the door, I had to stifle a girly squeal of delight. The bedroom had a perfect view of the horizon. There was an outdoor bathroom, rainwater shower and glass-bottomed bath. The balcony was furnished with sunloungers, and there was a swanky sound system in the sitting room.

Guests at Six Senses are not only encouraged to go barefoot, they are also given a bicycle to get around. Each bike has a small wooden number plate containing your room number and a basket (great for transporting snorkel and flippers), while the pedals are covered with canvas to make cycling without shoes a little easier.

I used the bike every day during my stay, and I tried to catch a glimpse of scuttling lizards as I headed along the shaded, treelined paths towards the ocean. Once at the beach, I loved snorkelling in the shallow waters. The coral around the island is some of the healthiest in the Indian Ocean.I also decided to try diving for the first time with Petra, the resident dive-school owner. Huge puffer fish, leopard sharks and manta rays had been spotted the day before, and I was told that occasionally turtles glide gracefully past.

One of the managers later explained that turtles are often spotted swimming close to the main bar – staff are convinced they like the relaxing, Balearic-style beats.One day the sea was quite choppy, so I headed for the spa instead. It was the most unusual I’d ever seen – nest-like cocoon structures set among the vivid green vegetation. The environmental theme continued here – most of the treatment ingredients are sourced from the resort’s organic gardens.

The same gardens also supply the resort’s various restaurants and its ice-cream parlour – the founder of Six Senses believes that we are all kids at heart, so we all must like ice cream. Offering 40 flavours and open from morning until night, the parlour is a popular haunt and a great place to swap stories with other holidaymakers.

I thought the sheer range of food on offer would mean I’d have to be disciplined about what I ate, but the hot days and warm, balmy nights made me lose my appetite. I opted for lighter fish dishes throughout my stay, and combined with all the swimming and cycling I did, I felt quite healthy at the end of my stay. It could so easily have gone the other way, especially with that endless supply of ice cream.

Once when I wasn’t stargazing on the beach, I chanced upon the twice-weekly open-air Jungle Cinema. Watching a film on a massive projector screen from the comfort of a lounger while sipping champagne and eating popcorn felt a little surreal, but was perfectly in keeping with what I had come to expect from Six Senses.I had always thought of the Maldives as being honeymooners’ paradise, and that there wouldn’t be a lot to do other than sunbathe. I was wrong. Yes, I received a healthy dose of hot sunshine, but it was a holiday of exploration too.

The stargazing was a brilliant experience – I’ve even considered buying a telescope now that I’m back home.At the end of my stay I didn’t really want to give my bike back, and I was sad when I had to put my shoes on again. I was going to miss the warm decking of my villa and the luxury of sand beneath my bare feet.The icy blast of air that greeted me as I landed back in London was all too familiar. On my first day back in the office after my trip, one of colleagues asked: ‘Is there actually anything to do in the Maldives other than lie in the sun with a book?’ I wasn’t sure where to begin. – DailyMail