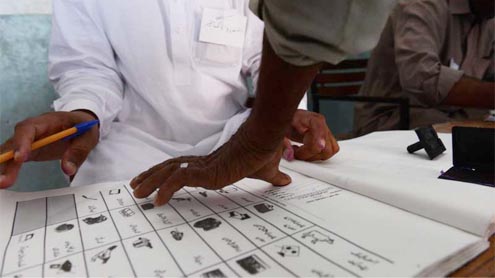 ISLAMABAD: By-polling in 41 national and provincial assembly constituencies started as per schedule on Thursday, DawnNews reported.

The polling is scheduled to continue till 5 pm.According to the Election Commission of Pakistan, 519 candidates are contesting for 41 seats — 15 of National Assmebly and 26 of provincial assemblies.Most of the seats had been vacated by the winners of more than one seat, while others had fallen vacant because of disqualification of candidates by superior courts.

Furthermore, in some constituencies, elections were not held on May 11 due to death of candidates.At the request of the ECP, the army has already deployed its troops in and around ‘highly sensitive’ polling stations.In most of the constituencies, a neck-and-neck contest is expected between candidates of ruling Pakistan Muslim League -Nawaz (PML-N) and Pakistan Tehreek-i-Insaf (PTI).

The Pakistan Peoples Party (PPP) is believed to be at number three in the contest.The PML-N and the PPP have not fielded their candidates for any provincial assembly seat in Khyber Pakhtunkhwa.Similarly, no candidate of the N-League is contesting for any provincial assembly seat in Sindh.NA SEATS: The National Assembly constituencies where by-elections will be held include NA-1 (Peshawar), NA-5 (Nowshera), NA-13 (Swabi), NA-25 (D.I. Khan-cum-Tank), NA-27 (Lakki Marwat), NA-48 (Islamabad), NA-68 (Sargodha), NA-71 (Mianwali), NA-83 (Faisalabad), NA-129 (Lahore), NA-177 (Muzaffargarh), NA-235 (Sanghar), NA-254 (Karachi) and NA-262 (Killa Abdullah).

Earlier, NA-1 and NA-71 seats had been vacated by PTI chief Imran Khan who chose to retain NA-56 (Rawalpindi). Mr Khan had contested for four NA seats and lost only one in Lahore to incumbent National Assembly Speaker Sardar Ayaz Sadiq.The NA-68 seat had been vacated by Prime Minister Nawaz Sharif who retained his home constituency (NA-120 Lahore).NA-129 had been left by Shahbaz Sharif who retained his Punjab Assembly seat to become chief minister.

NA-5 and NA-13 seats had been vacated by Pervez Khatak and Asad Qaisar of the PTI who retained their provincial assembly seats and were made chief minister and speaker of the KP Assembly, respectively.JUI-F chief Maulana Fazlur Rehman had decided to quit NA-27 and retain NA-24. The Maulana had also won the NA-25 (D.I. Khan) seat where by-election has been postponed for a few weeks because of threat of terrorist attacks.

NA-177 had been vacated by Jamshed Ahmad Dasti, NA-235 by Pir Sadruddin Shah Rashdi of the PML-F and NA-216 by Pakhtunkhwa Milli Awami Party chief Mehmood Khan Achakzai. They had won more than one seat.NA-83 and NA-254 seats fell vacant after the death of contesting candidates.By-elections will also be held for 15 seats of the Punjab Assembly, four of the Sindh Assembly, three of the Balochistan Assembly and four of the KP Assembly.

PUNJAB ASSEMBLY: Interior Minister Chaudhry Nisar Ali Khan had vacated his provincial assembly seat (PP-6) and chose to retain his National Assembly seat.The election in PP-51 could not be held due to death of Mohammad Amjad Rafique. Monis Elahi of the PML-Q gave up his PP-118 seat.Khawaja Mohammad Asif of the PML-N had decided to quit PP-123 and retain NA seat to become Minister for Water and Power.PP-161 and PP-247 had been vacated by Shahbaz Sharif and PP-243 by Zulfiqar Ali Khosa.