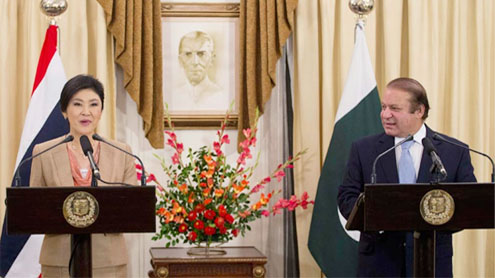 ISLAMABAD : Pakistan and Thailand Tuesday expressed the resolve to build a strong economic partnership, double their trade figures to US two billion dollars in next five years and eventually enter into a Free Trade Agreement.

Prime Minister Muhammad Nawaz Sharif and Thai Prime Minister Yingluck Shinawatra Pakistan addressing a joint press stake out after a round of bilateral talks also expressed their commitment to collaborate in the field of trade, culture, infrastructure development, science and technology, defence, education and tourism. Prime Minister Sharif said the two sides held a “comprehensive discussion” on wide range of issues and noted the convergence of views on important bilateral and international issues. The two sides also discussed regional and international issues of mutual interest.

Prime Minister Shinawatra extended her country’s support to Pakistan in becoming a Full Dialogue Partner with the ASEAN, as Prime Minister Sharif appreciated Thailand’s “consistent support” for Pakistan’s enhanced partnership with the regional forum.Sharif also expressed satisfaction with the progress made in recent years in the political, economic and defence spheres.“We agreed to further consolidate and expand this partnership for the mutual benefit of our two peoples,” he added.

Prime Minister of Thailand also noted cooperation in security and defence particularly in the areas of training and joint exercises.The Prime Minister said building robust economic and trade relations were a priority with the government.“Both sides have agreed to work towards a Free Trade Agreement to form the center piece of our economic partnership,” the Prime Minister said and mentioned that both the countries have agreed to establish a Joint Trade Committee and a Joint Business Council at the private level to promote business-to-business contacts on the two sides.

“We are happy to note that private business sectors on both sides have also met today,” the Prime Minister said and also mentioned that the inaugural session of the Joint Trade Committee was being held tomorrow to identify areas of future collaboration.He expressed the hope that these desired steps would expand bilateral trade and investments and facilitate business partnerships.“We have invited Thai private businesses to invest in Pakistan in various sectors including infrastructure development, energy, autoparts manufacturing, food processing, packaging, gems and jewelry, tourism and hospitality,” Prime Minister Sharif said.

Prime Minister Nawaz Sharif said greater connectivity between Pakistan and Thailand was also very important to facilitate trade and investment and said “to this end we believe that Pakistan and Thailand may utilize each other’s geo-strategic location.”He said people to people contacts were one of the most important aspects of their relations. He said the number of Pakistani tourists visiting Thailand was steadily increasing and expressed the hope that “Thai Buddhist community would visit the land of Ancient Civilisation – Gandhara, known as a bedrock of their faith and spiritualism.Sharif said Pakistan and Thailand were connected by common linkages through Gandhara civilization.

“We have agreed on the need to enhance and deepen cooperation in the regional and multilateral frameworks,” the Prime Minister said.“We desire to comprehensively upgrade our relationship with Thailand in all areas of cooperation,” he said and termed it a critical component of “Vision East Asia” policy that complements Thailand’s “Look West” policy.The Prime Minister of Thailand also mentioned the importance of enhancing people to people contacts and agreed on need to further enhance bilateral and regional cooperation through various multilateral fora, like Asian Cooperation Dialogue and for enhanced South Asia and South East Asia interaction.

She expressed the belief that international cooperation will help address the challenges being confronted by extremism and terrorism and also sought support of Pakistan at the Organisation of Islamic Conference.Prime Minister Sharif said mentioned his “comprehensive discussions” with Prime Minister Shinawatra on a wide range of issues and said there was a convergence of views on important bilateral and international issues.Prime Minister of Thailand Yingluck Shinawatra said that though Pakistan and Thailand enjoy deep friendly relations for the last sixty years, she was the first Thai PM to visit Pakistan in more than a decade.

She expressed the condolences of government and people of Thailand over the losses of life and property in the recent floods in Pakistan.The Thai Prime Minister also felicitated Pakistan on the successful holding of the general election and the Presidential election. She said Thailand believes in value of democracy and the respect the will of the people.The Thai Prime Minister lauded the sacrifices of the people of Pakistan in confronting extremism and terrorism and said the two countries can share their experiences in what her country had to face in its Southern parts.

“We have common concern on the challenge of extremism and terrorism and Thailand respects the sacrifices given by the government and people of Pakistan in dealing with these challenges.She also invited Prime Minister Sharif to visit Thailand.The bilateral meeting was attended by Deputy Prime Minister of Thailand Plodprasop Suraswadi, Deputy Minister of Commerce Yanyong Phuangrach, Ambassador of Thailand Marwin Tan-Attanawin. While the Pakistan side included Adviser to Prime Minister on National Security and Foreign Affairs Sartaj Aziz, Special Assistant to PM Tariq Fatemi, Minister of State for Privatisation Anusha Rehman, Minister of State for Privatisation Khurram Dastagir, Foreign Secretary Jalil Abbas Jilani and senior officials of the two countries. – APP