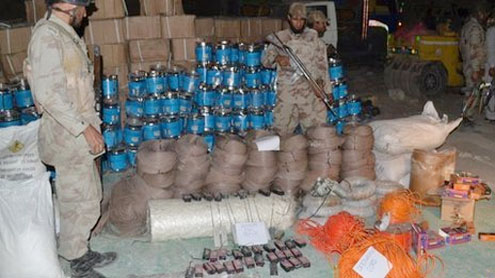 QUETTA: Paramilitary forces on Tuesday seized more than 100 tonnes of bomb-making chemicals from a truck and a compound in Balochistan and detained 10 suspects, officials said.

They also found wires, detonators and mixers to turn the chemicals into bombs, paramilitary Colonel Maqbool Ahmed told AFP. “We have arrested 10 people during the raid at the compound and the truck and seized 100.5 tons of explosive material with detonators,” Ahmed said.

Suspects told investigators that potassium chlorate and ammonium chlorate were packed with wires and detonators into vehicles at the compound, he said.Balochistan province is frequently hit by bomb attacks. Baloch rebels rose up in 2004, demanding political autonomy and a greater share of profits from the region’s mineral resources. – DailyTimes