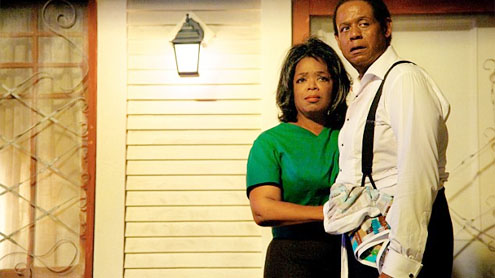 A cinema has infuriated movie-goers after armed guards were present at a showing of ‘Lee Daniels’ The Butler’.

There was an ‘abnormally heavy’ level of security at the Regal Cinemas Majestic Stadium movie theater in Silver Spring, Maryland, according to a visitor on Saturday.A woman called Tiffany Flowers took to Twitter the next day to express her ‘utter disgust’ at the treatment of movie-goers.It appeared to her that the security presence  was confined to the showing of ‘The Butler’ at which the majority of the audience was black.Through her Tweets, she explained that the theater checked customers tickets twice before being met by a guard who told them where to sit.But the police activity didn’t end there. Ms. Flowers went on to add that armed guards faced the crowd whilst the film was being shown.

‘The almost entirely black audience of ‘The Butler’ was subjected to watching the film while armed guards faced the audience,’ she wrote. ‘Why?’Spanning more than 50 years of history and a series of presidents, The Butler spotlights the US civil rights struggle through the life and career of a White House servant.Inspired by Eugene Allen, who held the post for 34 years, the film is already seen as a serious contender for the Oscars.Director Lee Daniels, known for Precious and The Paperboy, used Allen’s persona to create a character called Cecil Gaines, played by Forest Whitaker.

Through Gaines, viewers are taken from cotton fields in segregationist Georgia to the election of Barack Obama as America’s first black president in 2008.Allen died in 2010 at the age of 90.The publicity tour for the film has featured heavy discussion of race, and the film’s relevance to current events, including racial profiling in general.The film was in the number one spot at the box office at the weekend bringing in $25 million.Ms. Flowers said she didn’t see armed guards at any of the other films showing at the location and management at the theater confirmed to her that there weren’t guards at any other films over the weekend.Russ Nunley, a representative from Regal, issued the following statement:

‘Regal Entertainment Group routinely employs security personnel to ensure the safety all of our guests and staff.’When a theater experiences sold out showings of any feature, security will assist with crowd control and guest assistance throughout the facility, including auditoriums.’This weekend our Majestic theater experienced a tremendous guest response to the feature the ‘Lee Daniels’ The Butler’ such that additional showtimes were added to meet our guests demands.’At no time did local management receive any guest complaints or concerns about our security or staff, who worked diligently to meet all of our guests needs.

‘To the extent any guests were disappointed with their experience, we welcome the opportunity to address their concerns and provide them the best entertainment experience possible in their future visits to our theaters.’The cinema’s controversial policy came as box office figures put The Butler in the number one position.Starring Whitaker as a longtime White House butler and Oprah Winfrey as his boozy wife, the Weinstein Co. biopic debuted in the top spot with $25 million, according to studio estimates on Sunday.

But the weekend’s three other major new releases, including the action romp Kick-Ass 2, failed to find traction with fans.’We expected to do well, but we didn’t expect to do this well,’ said Erik Lomis, president of distribution and home entertainment for Weinstein Co., adding that The Butler is the company’s first No. 1 debut since 2009’s Inglourious Basterds. – DailyMail