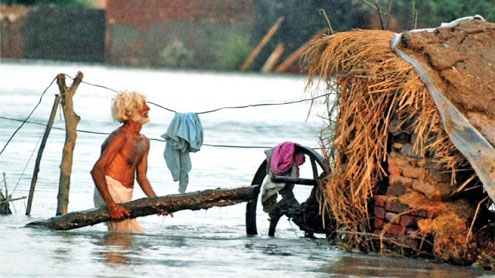 ISLAMABAD / MULTAN: While central and southern Punjab is braving and Sindh is bracing for devastating floods triggered by incessant downpours, officials warned that another weather system could bring more widespread rains in the country.

He added that the current weather system has already weakened and the authority was worried about a new system which could bring more widespread rains, especially in northern and central Pakistan. A high intensity flood was likely to pass through Guddu Barrage on August 20-21 where mass evacuations have already been ordered.“Now, we are not worried about the current system which has already weakened. It’s the new monsoon system that worries us,” said Brig Zia. “The new system will start on August 25.”The NDMA spokesperson wouldn’t say how long the new weather system would last. However, he said that it would bring medium to heavy rains for 10 or more days.

The new system would target the northern parts of the country, but considering the recent erratic weather patterns, some areas of central districts, including Dera Ghazi Khan, Dera Murad Jamali and adjacent areas might also be affected, Brig Zia said. “The new system would particularly affect Azad Jammu and Kashmir as it is the catchment area besides targeting the main districts of Lahore, Gujranwala and other parts of central Punjab.”About the ongoing floods, the NDMA spokesperson said water was receding in Narowal district, while the breaches that swamped Chiniot district had been plugged. According to the NDMA statistics, 2,400 houses have been destroyed and 2,648 damaged by the floods. Similarly, 592 villages have been affected where 44 relief camps have been established.

Meanwhile, high floods reached upper parts of south Punjab on Sunday. Though precautionary evacuations have been ordered, the authorities said the situation was under control. The district administration has shifted around 14,000 people from villages on the bank of the River Chenab to higher ground with the help of Rescue 1122.“At least 20 relief camps have also been set up on the confluence of Multan-Muzaffargarh border,” Gulzar Shah, the district coordination officer of Multan, told Media. “However, some villagers are reluctant to leave their homes. We’re trying to convince them to shift to the relief camps,” he added.

The district administration in Vehari declared a state of emergency and evacuated 50 villages as a high flood, carrying 350,000 cusecs of water, was expected in the rivers Sutluj and Chenab near Kabeerwaala and Mian Channu.In Rahim Yar Khan district, the police shifted more than 4,501 people and their 2,943 cattle to the 17 relief camps set up for flood affected people in anticipation. In Rajanpur, the ground channels of six union councils remained terminated and the rehabilitation of 30,000 affected people could not be started. – TheExpressTribune