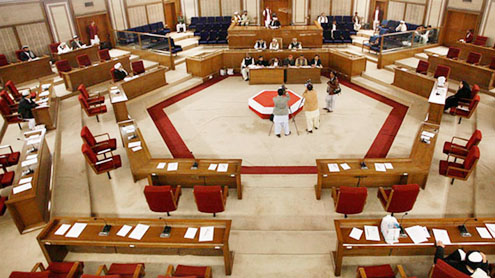 QUETTA: A total of 40 candidates are in the run in by-elections for one national and three provincial assembly seats in Balochistan.

The seats being contested are on NA-262 (Qila Abdullah-Chaman), PB-29 (Nasirabad-2), PB-32 (Jhal Magsi) and PB-44 (Lasbela-1).The NA-262 was vacated by Pakhtunkhwa Milli Awami Party (PkMAP) chairman Mahmood Khan Achakzai who retained his NA-259 (Quetta) seat.Election on PB-32 had been postponed due to the murder of a candidate.The election result of PB-29 was cancelled on the order of the Supreme Court after the degree of the winning candidate, Mir Abdul Ghafoor Lehri of PML-N, was found to be fake.

The BP-44 was vacated by Jam Mir Kamal Khan who retained his National Assembly seat.The Election Commission has finalised arrangements for holding by-elections on Aug 22 in the four constituencies. However, there are chances of the postponement of election on PB-32 in case there will be more rains and flooding in Jhal Magsi.Recent heavy rains in Khuzdar region and flooding in Mula river has badly hit the Jhal Magsi district. However, situation is improving because no more rain is reported in hilly areas of Khuzdar region.

An interesting and tough contest is expected in election for NA-262 where some political arch rivals are in the run.The PkMAP has fielded Abdul Qahar Wadan, a close relative of Mr Achakzai, for the NA seat who will face Qari Mohammad Sher Ali who is supported by both the Awami National Party (ANP) and Jamiat Ulema-i-Islam-Fazl (JUI-F). Another strong candidate in the constituency is Haji Mohammad Hanif of Jamiat Ulema-i-Islam-Nazriati (JUI-N). The PkMAP candidate is enjoying the support of PML-N which has withdrawn its candidate.

According to the Provincial Election Commissioner, 223 polling stations in the province had been declared sensitive and 128 highly sensitive.He said personnel of the army, Frontier Corps, Balochistan Constabulary and Levies Force would be deployed on polling stations to maintain law and order. He said 11 candidates were in the run for NA-262, 14 for PB-32, 12 for PB-29 and three for PB-44. – Dawn