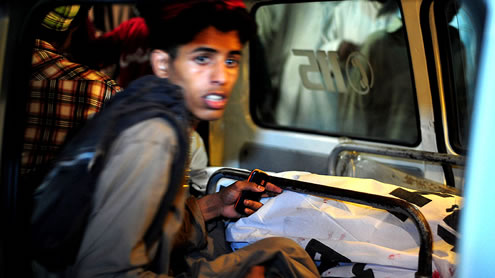 KARACHI: A bomb blast in Karachi early on Wednesday killed seven people and wounded 26 others, police said. The blast took place in the impoverished Lyari neighbourhood of the city after a football match. “The bomb was planted on a motorbike that was parked outside the stadium, killing seven people, many of them teenage boys,” police official Tariq Dharejo told AFP.

Dharejo says the bomb went off near the vehicle of a provincial minister, Javed Nagori, who was leaving after witnessing a late night match between two local teams in Lyari, where football is very popular. Nagori escaped unharmed, and the dead included spectators and local residents.

Moreover, he said that the bomb was a remote-controlled device. Local lawmaker Sania Naz from the Pakistan Peoples Party (PPP) also confirmed the blast and put the death toll at 11. She said those killed were aged from six to 15 years old.

The injured and bodies were shifted to the city’s Civil Hospital and Jinnah Hospital. Prime Minister Nawaz Sharif and Sindh Governor Dr Ishratul Ebad Khan condemned the blast and also instructed the authorities to provide best medical facilities to the injured. – DAWN