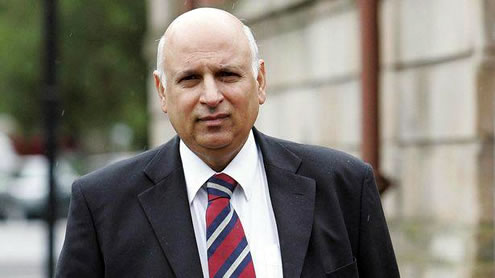 LAHORE: Ch Muhammad Sarwar will take oath as the 35th governor of Punjab to be administered by Chief Justice Lahore High Court Umar Ata Bandial at the Governor’s House on Monday (today).

Lahore High Court Chief Justice Umar Ata Bandial will administer oath to Sarwar at a ceremony at the Governor’s House. A spokesman of the Governor’s House said that Ch Sarwar was a non-controversial figure and had rendered valuable services for Pakistan on social, political, economic and diplomatic fronts.

He is a Pakistan-born-British businessman/politician who recently surrendered his British citizenship after being nominated as the Punjab governor. Sarwar was born on August 18, 1952 in Pir Mahal, Toba Tek Singh, Punjab. He got his early education in Toba Tek Singh and passed graduation from Faisalabad. He joined his father in the UK who ran grocery business. Sarwar married Parveen Sarwar in 1976 and has four children including three sons and a daughter. His son Anas Sarwar has succeeded him as MP from the Glasgow Central seat after he decided not to contest election in 2010. Sarwar and his brother founded the United Wholesale Grocers in 1982 by extending his family’s wholesale cash and carry business. The brothers split the business in 2002, with Sarwar forming United Wholesale (Scotland) while his brother retained the previous name. In politics, Sarwar remained a British Labour Party politician who was elected Member of Parliament (MP) in Glasgow from 1997 to 2010, first for Glasgow Govan and then from 2005 for Glasgow Central. Sarwar has the distinction of being the first ever British Muslim MP.

He wrote history in the British parliamentary history when he became the first MP to swear the Oath of Allegiance on the holy Quran, using the method laid out by the Oaths Act 1978. He became a member of the Scottish Affairs Select Committee from 2004, and has been chairman since 2005. In August 2006 he was a signatory to an open letter to Tony Blair criticising British foreign policy. Sarwar played a crucial role in bringing to justice the killers of Glasgow schoolboy Kriss Donald. He was nominated by PM Gordon Brown for a life peerage in 2010. – Dailytimes