Roads to Bara to reopen today after four years 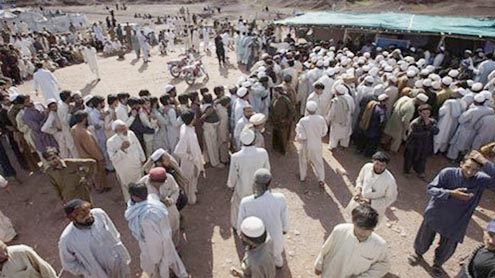 Roads to Bara to reopen today after four years

LANDIKOTAL: The roads leading to Bara Tehsil will be opened today (Saturday) after four years, while the incessant curfew has been lifted to facilitate the local people.

Political authorities have told media that display of weapons would be strictly prohibited on the main roads in Bara while the markets would be re-opened if the situation improved.Authorities said that security forces have cleared most of the areas of Bara, including Tirrah Maidan. Lashker-e-Islam chief had a few days ago appealed to the businessmen and minorities to come back and reopen their businesses in Bara.

The political administration has said that by Saturday (today) the main roads leading to Bara would be opened on an experimental basis.An incessant curfew has been in place and the roads remained blocked since the military operation began in the area in 2009 to contain the growing militancy, the political authorities told media persons in the Khyber House in Peshawar.The authorities have indicated that Bara markets would also be opened if the law and order situation improved and that curfew would be lifted by Saturday (today) to facilitate the locals move to their deserted homes.

“This is not an arrangement for the displaced persons to move back,” an official of Khyber House clarified.The political authorities have also warned that display of weapons anywhere in Bara would be strictly forbidden so that law and order situation could be further improved.The authorities have reportedly claimed to have absolutely established peace and regained controlled of Maidan Bagh in Tirrah, which had been a safe haven for the militants in the past on the border with Afghanistan. Sources said that now security forces have established their positions in Maidan Bagh, whereas in some parts of Tirrah the militants still exist.

The security forces conducted military offensives against the Mangal Bagh-led LI and TTP in Bara for more than four years, but it is still not clear whether the government’s writ or peace has been established in the area because thousands of families are still displaced and living in camps.However, the local people have welcomed the re-opening of the roads leading to Bara and lifting of the curfew, which they had demanded time and again.