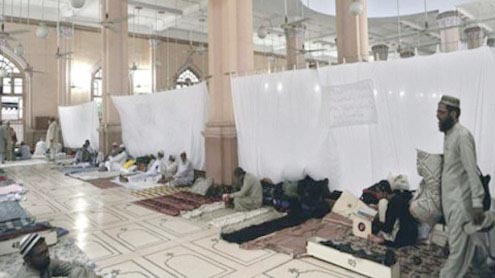 LAHORE: As the holy month of Ramazan-ul-Mubarak enters the last 10 days, millions of faithful on Tuesday started ‘Aitakaf’ (worship in seclusion) after “Asr” prayers in tens of thousands of mosques across the country.

Large city mosques became the centre of special prayers where hundreds of worshippers gathered for this religious duty called ‘Aitakaf,’ an intensive worship observed during the last 10 days of Ramazan.Dozens of men reached the Badshahi Mosque on Tuesday for Aitakaf.
These worshippers, like in other mosques across the country, will be provided Sehri and Iftari by their relatives to facilitate them to concentrate on their worship. As a part of worship and regular practice during Ramazan, many   and common citizens send food items for Sehri and Iftari in the mosques for the poor and needy.

Aitakaf is a Sunnah of the Holy Prophet (Peace Be Upon Him) and carries a multitude of blessings of the Almighty Allah. Men observe Aitakaf in small cubicles, set up by hanging large cloth sheets inside mosques, whereas women observe it at any corner or quite place in the house, which is not frequently visited by others. – DailyTimes