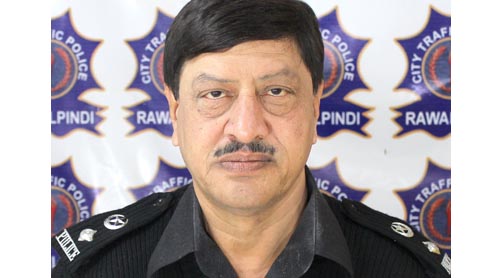 A plan to control traffic has been evolved, besides other arrangements, which have been made in this regard, said Chief Traffic Officer (CTO) Syed Ishtiaq Hussain Shah in a statement.He said traffic squads would be deployed at all main intersections of the city, whereas a helpline was also set up at Race Course traffic office. The helpline was working 24-hours and providing help and assistance to the citizens.

He said that Rawalpindi traffic police were taking effective measures to control one-wheeling and violation of other traffic rules. Duty timings of traffic wardens have been increased to ensure smooth traffic flow on city roads.Shah said that special arrangements have been made to control traffic jams so that citizens could easily reach their destinations within the shortest possible time.He said in view of the security of citizens, special traffic arrangements were made. Parking of vehicles near mosques, imambargahs and other religious places is not allowed.

Under the plan, traffic police officers have been directed to keep a vigilant eye on suspicious vehicles. Strict action in accordance with the law has also been ordered against vehicles having tinted glasses or moving in the city without number plates, he added.The CTO said traffic wardens have also been directed to ensure smooth traffic flow so that traffic jams particularly on congested roads could be averted.

Under a comprehensive traffic plan, which was devised for Ramazan, all out efforts were being made by city traffic police to ensure smooth flow of traffic on city roads mainly for Iftar timing, he added. The traffic officers have also been instructed to take stern action against one-wheelers without discrimination and no one should be spared if found involved in this dangerous act, he added.CM urged to take notice: The residents of Model Town (Humak), a rural area of the federal capital, have appealed to Punjab Chief Minister Shahbaz Sharif to take notice of alleged irregularities in the construction of road from Swan to Kak Bridge.

They expressed concerns over poor quality and inordinate delay in the completion of the road.The Punjab chief minister allocated a special fund of Rs 440 million for the construction of the road last year after a long tussle between the Capital Development Authority (CDA) and the provincial government.The residents said the recent monsoon rains have exposed the material used by the contractor as cracks have emerged on various parts of the road.Zaheer, a lawyer and a resident of the area, said that the contractor started work on the road around six months ago, which was to be completed in three months.

He said it was the hallmark of Punjab government to complete underpasses and flyover bridges in 90 days time but the Kahuta road contractor had not met the deadline while compromising on quality. Muhammad Afzal, another resident, alleged that the contractor was given a free hand as the construction work was not being monitored by the authorities concerned. He said a large number of vehicles remained stuck on the road due to the poor strategy of the planners to divert the traffic or make alternate arrangements.

The under-construction portion of the Kahuta road shares major burden of traffic as it touches both the GT Road and Islamabad Highway and also links Azad Kashmir with other parts of the country, he added.Residents of old buildings directed to vacate: The residents of 180 buildings declared dangerous in Rawal Town have been directed to vacate their houses and shift to safe places.The enforcement department of the Rawal Town Municipal Administration has declared 180 old buildings dangerous and warned their residents of a possible collapse during heavy rains.The buildings near Nullah Leh were declared “extremely dangerous” and unsafe in a survey conducted by the Tehsil Municipal Authority (TMA), which has issued notices to the residents to vacate the buildings. – DailyTimes