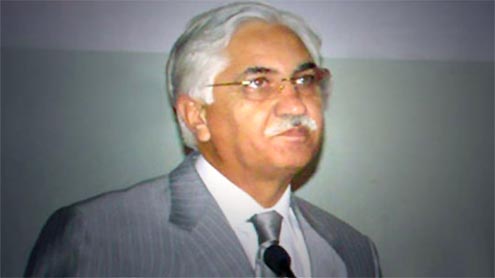 ISLAMABAD: On the advice of the prime minister, acting President Nayyar Hussain Bokhari has summoned separate sessions of the National Assembly and Senate on July 29 for the presidential election to be held the following day.

According to an official announcement, the sessions will commence at 4pm.The Election Commission of Pakistan has announced that the scrutiny of nomination papers would be carried out by Chief Election Commissioner Fakhruddin G. Ebrahim on Friday.According to the commission, two dozen candidates have filed 33 nominations papers, with some of them having filed more than one paper.PPP candidate Raza Rabbani has submitted seven nomination papers.

Talking to Dawn, senior ECP officials said the papers of most of the candidates, except those of Mamnoon Hussain of the PML-N and his cover candidate Iqbal Zafar Jhagra, Raza Rabbani and retired justice Wajihuddin Ahmed of the PTI, might be rejected for various reasons.

According to Article 41(3) of the constitution, the president will be chosen for five years by the electoral college of 706 lawmakers, including 104 senators and 342 members of the National Assembly and 260 of the provincial assemblies.By-elections for about 50 seats of national and provincial assemblies are scheduled for August 22. – Dawn