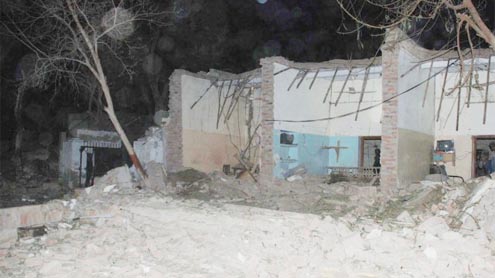 The ISI office might be the target, DIG added. He said that a shootout took place between the security officials and terrorists after the explosions. DIG  said that around two to three explosions took place but the nature of the blasts was yet to be ascertained. However, a mam was killed and 25 others injured in the attack. It may mentioned that the blasts caused major damages to the ISI office.

The wounded have been shifted to the hospital where they are undergoing medical treatment.Earlier, police and law enforcement agencies rushed to the site of the blasts and cordoned off the area.Emergency has been declared in all the hospitals of  Sukkur city.The explosions affected  the Barrage Colony area where the residences of several government officers including Judges Colony and the offices of an intelligence agency are known to be located. The nature and intensity of  explosion could not determined immediately. – APP