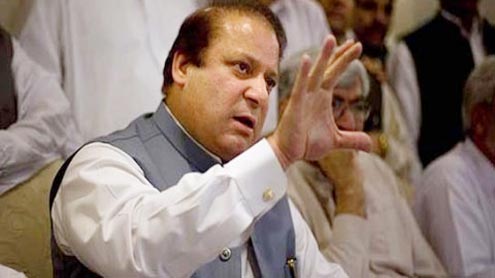 Prime Minister Nawaz Sharif on Tuesday said the energy crisis and terrorism topped his government’s priority list and he would not sit idle until the country was purged of both the problems, adding that he would fulfill Pakistan Tehreek-e-Insaf (PTI) Chairman Imran Khan’s demand by convening a meeting of the PTI chief and Chief of Army Staff General Ashfaq Pervaiz Kayani in which the country’s engagement in the war against terrorism and the policy on drone strikes would be discussed.

PTI chief Khan had made his participation in the prime minister’s all parties conference (APC) conditional, stating that he needed a briefing over the country’s policy on drone strikes and its engagement in the war against terrorism.Nawaz told journalists that the government would also hold the APC probably soon after Eidul Fitr to chalk out the country’s security policy, adding that foreign investment would remain a dream until a secure environment was provided which was mandatory for economic jumpstart and revival.

He said he would also consult the military top brass over the matter and asked the journalists and intelligentsia to send him written proposals if they had any.Unveiling the energy policy, Nawaz said it envisaged ending load shedding in three years’ time and making the country energy surplus in five years. He said the government needed a no-objection certificate (NoC) from India to ensure World Bank funding for the Diamer-Bhasha Dam. Here Dar interrupted the prime minister and said the government had told the World Bank that it would lower the dam’s height and the World Bank officials agreed to provide the funding and there would be no need for seeking an NoC from India now.

Later, Dr Malik gave the journalists a two-hour-long power point briefing over the government’s energy policy. He said the policy focused on reduction in the cost of power production from Rs 14.6 per unit to Rs 9 per unit and to completely eliminate power theft and line losses.He said upgrading the distribution system and increasing capacity by installing new power projects including hydro power projects, were the hallmark of the government’s five-year plan. Malik said the purpose of the policy was to remove red-tape and bring in transparency and accountability in the energy sector.

Dr Malik added that the policy aimed at rationalising the tariff structure and providing a level playing field to all. He said the consumers using less than 200 units of electricity would be provided electricity on subsidised rates while those crossing the redline would have to pay higher tariff.He said two projects, envisioning to produce 1,450 megawatts of electricity, would be installed within a year and the current bulbs would be replaced by energy savers.

Malik said 90 percent of the thermal power plants in India had been converted to coal while in Pakistan only one percent coal-based thermal power was being generated. He said power conservation was also priority of the government.To a question, the prime minister said the presidential election should be delayed within the limits provided in the constitution as August 6 was falling on Ramadan 27 and there was a possibility that at least 10 percent of the lawmakers would not be able to participate in the voting. He said since the presidential election was important, the Election Commission of Pakistan should ensure 100 percent participation.

Meanwhile, an official statement quoted the prime minister as saying that most of the time and energy of the government had been consumed in addressing the daunting issue of energy shortage in the country and ensuring its smooth availability to domestic users‚ industries and other sectors.Talking about the challenges facing the government‚ the prime minister said most of the state-owned institutions such as the PIA‚ Railways and Pakistan Steel Mills were eating up billions of rupees. – PT