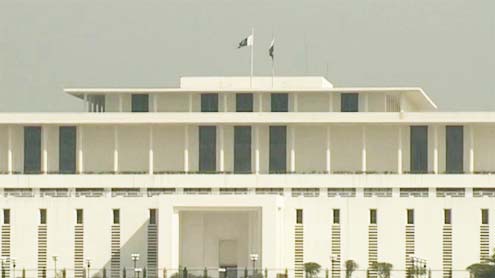 ISLAMABAD: The chief justices of high courts will receive nomination papers for the presidential election till July 24 (12:00 noon) and these will then be forwarded to the Returning Officer (Chief Election Commissioner) for scrutiny.

The prospective candidates will be needed to attend the scrutiny process by themselves or through their authorised representative along with proposers and seconders, who will bring along with them their original CNICs issued to them by the Senate/National Assembly Secretariat or respective provincial assembly secretariat.

In this connection, the Election Commission of Pakistan (ECP) wrote a letter to the registrars of the five high courts on Tuesday and reminded that as per the schedule, nomination papers would be filed before the chief justices of the high courts (presiding officers).

Meanwhile, the commission once again drew the attention of political parties to the provisions of Article 13 of the Political Parties Order, 2002 which provides that every political party shall submit to the Election Commission, within 60 days from the close of each financial year, a consolidated statement of accounts of the party, duly audited by a chartered accountant.

The commission said that prescribed printed forms are available free of cost at the Election Commission Secretariat, Islamabad, and in the offices of provincial election commissioners, Punjab, Sindh, Khyber Pakhtunkhwa and Balochistan.It may be added here that in terms of Article 14 of the Political Party Order, 2002, a party which fails to submit its statement of accounts under Article 13 will not be eligible to obtain the election symbol for contesting elections for Majils-e-Shoora (parliament) and provincial assemblies.

The statements are required to be delivered to the secretary, Election Commission of Pakistan, at the Election Commission Secretariat, Constitution Avenue, G-5/2, Islamabad, through an office-bearer of the party, duly authorised by the party leader.Under Rule 11 of the Political Parties Rules, 2002, the statements received through post, fax, courier service or any other mode will not be entertained, the statement noted. – Nation