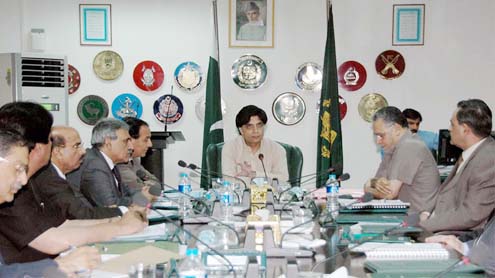 ISLAMABAD: Interior Minister Chaudhry Nisar Ali Khan is going on his first visit as federal minister to Karachi on Monday to assess the law and order situation in Sindh, particularly in its capital.

An official of the interior ministry said the minister would meet Chief Minister Qaim Ali Shah and Governor Dr Ishratul Ibad and discuss ways of enhancing coordination between the centre and the province for improving the security situation.He will preside over a meeting of heads and senior officials of security and law-enforcement agencies in the province.Chaudhry Nisar is also scheduled to meet PML-F chief Pir Pagara to discuss the political situation in the country with particular reference to the forthcoming presidential election. The PML-F is an ally of the PML-N at the centre.

The interior minister’s visit to Karachi has acquired significance because of a recent controversy over his last month’s statement in which he reportedly ‘warned’ the Sindh government to improve security situation.The PPP and the MQM protested against the statement, terming it interference in the affairs of the province.

The minister later clarified the National Assembly that his statement had been reported out of context and he had not given any warning to the Sindh government. He also said that the federal government would fully cooperate with provincial governments and provide every assistance whenever desired to help them maintain law and order.

Karachi has been a victim of incidents of terrorism and target killings for many years and the situation remains unchanged in several parts of the city.Meanwhile, JUI-F chief Maulana Fazlur Rehman called on Sunday for reducing trust deficit between the federal and Sindh governments.In a statement, he expressed concern over the situation in Lyari and warned that it could get out of control. The centre and the province differ widely on their perception about the situation on the ground, he added. – Dawn