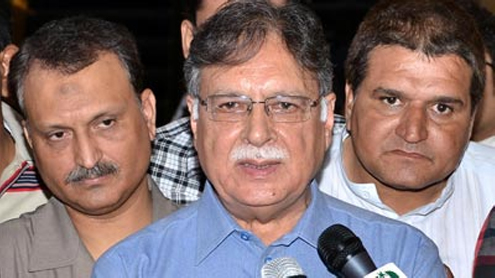 ISLAMABAD: Federal Minister for Information and Broadcasting Pervaiz Rashid on Monday said that main objective of All Parties Conference (NPC) was to formulate a collective national strategy to eradicate terrorism and maintaining peace in the country.

He said that Pakistan Muslim League (N) government was fully committed to maintain peace and stability in the country with negotiation and consensus among all the stakeholders. Minister of Information said that all the political parties have been invited on July 12 to participate in the APC and openly discuss their opinions and give suggestions to eradicate terrorism from the country.

Pervaiz Rashid said that his government was making continuous efforts  to make joint strategy against terrorism and to maintain peace and stability in the country.Talking to a private TV channel, he said that peace with dialogue was the top priority of the government, which was linked with future of the country and also necessary for political and economic stability.

Replying to a question, he said that government was committed to give the constitutional rights to the people of Balochistan and to remove their sense of deprivations.He condemned the tragic bomb explosion in Lahore food street in which  several people killed and injured and added those people involved in terrorist activities actually wanted to de-stabilize the country.

Abbottabad Commission’s report on Osama’s stay in Pakistan, US raid

Abbottabad Commission’s report on Osama’s stay in Pakistan, US raid