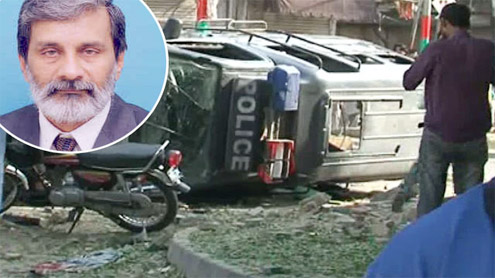 KARACHI : Four persons including three policemen and one Rangers personnel were killed and 12 others injured, including Justice Maqbool Baqar in a blast at Burnes Road in downtown Karachi on Wednesday.

According to Police and Edhi sources, the blast occurred near the vehicle of the senior judge of the Sindh High Court, Justice Maqbool Baqar.One of the victims who lost his life in the incident was identified as Muhammad Saleem Mandera, driver of Justice Maqbool Baqar.Deceased Ranger personnel was identified as Asharaf while the deceased police personnel were Khalid Mehmood and Mohammad Jameel.

The injured Justice Maqbool Baqar was shifted to hospital where his condition was said to be stable.Besides, the car of Justice Maqbool Baqar which was badly damaged in the blast, a motorcycle and a police van were also destroyed.The security personnel reached the spot and cordoned off the area.The injured were shifted to the Civil Hospital and Jinnah Post Graduate Medical Center. – APP

Musharraf’s fate hanging in the balance?