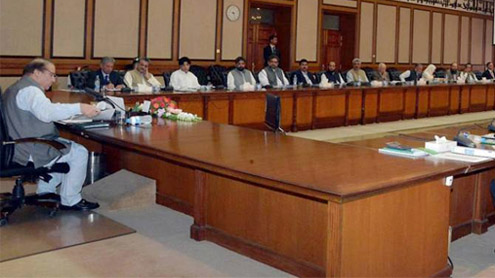 ISLAMABAD: Prime Minister Muhammad Nawaz Sharif on Monday said the common man must be provided relief and transparency be maintained at all levels of new energy policy and its implementation.

The new policy should focus on reducing demand and supply as well as the cost of production, the Prime Minister said while chairing a meeting held here to review energy policy where he was apprised about its salient features.He said efficiency, transparency and provision of maximum relief  to the common man should be the hallmark of new energy policy, which  would be announced after completion of a consultative process with stakeholders, including all federating units.

The government’s energy team apprised the meeting that the “new energy policy would transform red tape paradigm to red carpet one and provide maximum facilitation to public as well as investors.”The Prime Minister directed that potential investors at both national and international levels must be contacted and apprised about prospects of better return in the energy sector.He further directed that maximum efficiency level must be kept as the benchmark for the energy policy to get maximum results and expressed the confidence that dedication, zero tolerance to corruption, better management and use of modern technology would yield better results.

Prime Minister Nawaz said the country would be back on the path of progress and development as part of the government’s initiatives.Referring to the recent memorandum of understanding (MoU) signed with Chinese company M/s Norinco International, he hoped that such other international firms would follow the suit.The Prime Minister appreciated the Ministry of Water and Power for taking steps for automation of distribution system and said with minimization of human involvement and digitalization of electricity distribution, the element of corruption and theft would be efficiently checked.

The meeting was further informed that in line with the directives of the Prime Minister, efforts would be made to reduce cost of production to provide relief to larger segments of the society.The meeting was apprised that energy mix and utilization of natural resources would be applied to achieve desired results.The meeting was attended by Minister for Petroleum Shahid Khaqan Abbasi, Minister for Water and Power Khawaja Muhammad Asif, Punjab Chief Minister Muhammad Shahbaz Sharif, Special Assistant to Prime Minister Dr Musaddiq Malik, Shaukat Fayaz A. Tarin, Zayad Bashir and senior officials. – APP