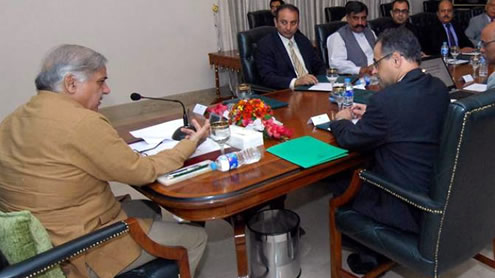 LAHORE: Punjab Chief Minister Muhammad Shahbaz Sharif has said that his government has presented a revolutionary budget for the fiscal year 2013-14 in which a number of important measures have been announced for the progress, development and welfare of the masses.

He said the new provincial budget would usher in an era of progress and prosperity. He said that tax has been imposed on the elite while the poor and low-income segments have not been burdened. The chief minister said that new budget would prove to be a roadmap of consolidated development in social sectors.

“The minimum wage of labourers has been increased from Rs 9,000 to Rs10,000 and will be gradually increased to Rs 15,000 per month. Instead of putting burden on the common man in the new budget, tax will be recovered from the elite and spent on the welfare and uplift of the poor and low-income people,” said Shahbaz Sharif.

He said the Punjab government has taken effective measures to bring the affluent classes into the tax net which will broaden the tax base and more resources will be available. He said that process of simplicity and austerity has been started from chief minister office and its expenses have been curtailed by 30%. He said that every penny of public money is a sacred trust and will be treated as such while the policy of merit and transparency will continue. He said that substantial funds have been allocated for education, health and energy sectors. Sharif said that Punjab government would also launch the metro bus project in Rawalpindi, Multan and Faisalabad. He said like the last year, more funds have been earmarked for south Punjab in the new budget, compared to its population. He said that a sum of Rs 93 billion rupees has been allocated in the budget 2013-14 for the development of south Punjab.

He said a record development budget of Rs 290 billion will play an important role in raising the living standard of people. The chief minister said that a number of measures have also been announced in the budget for maintaining law and order. He said that 500 sub-inspectors would be recruited in the police department through Public Service Commission on merit who will help in implementation of the government policy of transformation of Thana culture. He said that a massive sum of Rs 20.5 billion has been allocated for energy sector in the budget, which will help in overcoming energy crisis.

He said that in order to provide solar energy and biogas-operated tube-wells to small farmers, an amount of Rs 7.5 billion has been earmarked in the budget. He said that government through utilisation of its resources and help of private sector will ensure economic development and creation of maximum job opportunities. – Dailytimes