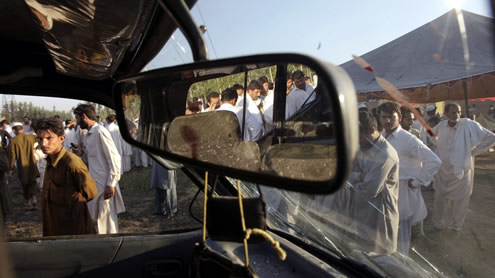 PESHAWAR: A suicide bombing at a funeral in Mardan on Tuesday killed at least 35 people, including a Khyber Pakhtunkhwa Assembly member, and injured dozens, police said, the deadliest attack to hit the country in more than three months.

The attack in Shergarh town in Mardan District came during funeral prayers for the owner of a local fuel station. Police said the politician appeared to be the target of the blast, which highlights the security challenges facing the new government of Prime Minister Nawaz Sharif. Newly-elected independent member of Khyber Pakhtunkhwa Assembly Imran Mohmand was among the 35 people killed in the suicide attack, a government minister confirmed. The provincial government spokesman Shaukat Yousafzai confirmed the killing of the MPA and that he was the target of the attack. “I have information from police that MPA Imran Mohmand is among those killed in the attack in Shergarh town in Mardan district,” he told Daily Times. A local police official, Jaffer Khan, said, “The bomber came on foot and blew himself up near Imran Khan Mohmand, who seems to have been the target.”

As the funeral prayers ended, a big explosion took place, a survivor of the attack said. He told media in Mardan that around 800 people were attending the funeral of Haji Abdullah, who was gunned down on Monday. A large number of people and elected parliamentarians were also present during the funeral. The Khyber Pakhtunkhwa government has announced cash compensation for those killed and injured in the deadly suicide blast. Heirs of those killed in the blast would be given Rs 300,000 and the injured will get Rs100,000. Imran Mohmand was elected as an independent MPA from PK-27 constituency in Mardan District. He is the second Khyber Pakhtunkhwa Assembly MPA who has fallen victim to terrorism since the Pakistan Tehreek-e-Insaf took power in the province on May 30.

Earlier, another PTI MPA, Fareed Khan, was gunned down in Hangu bazaar on June 4. “He was under threat and his office was attacked during election campaign,” Shaukat Yousafzai said, adding that the provincial government had provided him with policemen for security, besides he had his personal guards. Shergarh borders Malakand region where the Taliban-linked militancy had wrecked havoc before the military was ordered to restore the state’s writ in 2009. Mardan DIG Jaffar Khan said initial investigation revealed a suicide bomber struck the funeral. No group has claimed responsibility for the attack yet. However, local police suspect the Taliban militants hand in the attack who security sources believe hold sway in Mardan District since Taliban were ousted from strongholds in Swat district.

President Asif Ali Zardari has strongly condemned the suicide blast. Expressing his heartfelt sympathies with the bereaved families, the president prayed for the departed souls and for courage to the families to bear their losses with fortitude. He directed the authorities concerned to ensure that best medical assistance is provided to the injured.

More than 150 people died in militant attacks during the election campaign but Tuesday’s bombing is the deadliest since a blast in an area of Karachi on March 3 killed 50 people. The attack comes three days after 25 people died when militants blew up a bus carrying female students in Quetta and stormed a hospital where survivors were taken for treatment.

Khyber Pakhtunkhwa is on the frontline of a seven-year Taliban insurgency and borders the semi-autonomous tribal belt, where US drone strikes target Taliban and al Qaeda operatives. Washington considers the tribal areas a major hub of Taliban and al Qaeda militants plotting attacks on the West and in Afghanistan. – Dailytimes