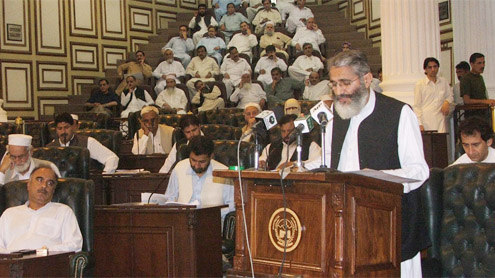 “I am pleased to announce that no new tax has been imposed in the budget nor any upward or downward adjustment has been made in the provincial taxes, however to bring improvement in the taxation system, reforms process would be started with the establishment of Khyber Pakhtunkhwa Revenue Authority.”, said Finance Minister Sirajul Haq in his budget speech in the KPK Assembly. The total revenue receipts and expenditures for 2013-14 have been pitched at Rs 344 billion. Giving breakup of the receipts to be obtained during the next fiscal year, he said, the province expected to get Rs. 198.269 billion from the federation under various taxation heads which is eight percent more than the current fiscal year.

The province likely to secure Rs. 23.823 billion as expenditures incurred during unrest in war against terror and it is also eight percent more than the 2012-13.He said that the province will get 24 percent increase from the oil and gas royalty it generated in southern districts which comes to Rs. 27.495 billion.Rs. 6 billion will be generated from services on general sales tax while the province own receipts stood at Rs. 10.925 billion including Rs. 2.361 billion from the hydel power stations.

The Finance Minister said that Rs. 6 billion would be obtained as net hydel profit and Rs.25 billion as arrears from the net hydel profit during the year 2013-14.The foreign aid component for the next year is consisted of Rs. 35 billion and Rs. 720.70 million likely to be generated from other miscellaneous resources.The KPK Finance Minister said that expenditures to be incurred during the next fiscal year has also been estimated at Rs.344 billion of which Rs. 211 billion have been allocated for current revenue expenditures which are 10 percent more than the outgoing fiscal.He said that record massive allocation has been made for education sector which is Rs.66.60 billion.

At the outset of his speech the finance minister said that in the recently held general elections the people of KPK voted for change.This change in KPK he said was a problem for the people who are corrupt and inefficient and they would be held accountable for their misdeeds.The change in KPK was a ray of hope for the province’s poor people.“I gave this message to the whole world and people of Pakistan that our coalition government in the province would follow the footprints of Riyasat e-Madina, the finance minister said adding, we will try out level best to establish exploitation free society where justice prevailed.

Our coalition government has got only two weeks time for budget making and we could not find time to minutely review the state of economic indicators.The law order situation in previous government was in shamble, the pace of industrial development, process of reconstruction and uplift was slow resultantly the educated lot had got less chances of employment.

“Our region remain at the verge of destruction, he said adding we will end this war and announce a new war against corruption, unrest, poverty, and injustice in the province”, he added.He said that we agree that state of provincial economy was not acceptable and the provincial economy had become stagnant.If we want that our province to progress then we have to ensure economic growth and assured the house that we will take growth rate to seven percent during next three years.

The elimination of poverty, provision of maximum facilities to the poor segment of the society and development of backward districts are three basic priority areas of the present coalition government of KPK.The Finance Minister said that to achieve these goals, the government would establish good governance by evolving comprehensive policies in all the sectors and profit earning sectors like services, energy, and industry etc woulde developed in a manner to play key role in the economic prosperity.  He said that we will ensure to achieve the millennium development goals by 2015.

Sirajul Haq said that administrative matters would be made subservient to principles of justice and cost of business would be considerably reduced. The poverty ratio would be brought to half of the present ratio in next three years,he said adding, cities would be made hub of development activities and an environment conducive for investment would be created for the investors so that hey come here without any fear.

He said that establishing simple style of ruling, elimination of luxurious spending, reconstruction of schools on war footings, revival of damaged infrastructure, construction of new hydel power stations to get rid of load shedding, protection of the rights of the labourers, abolition of VIP culture, free treatment of poor patients in the hospitals, protection to worship places f minorities and provision of funds of local bodies elections would be the main priorities of the KPK government.

He said that the total outlay of the annual development plan is Rs.118 illion which is 12 percent more than the current fiscal year adding the new ADP consisted of 983 projects including 609 ongoing and 374 new schemes.We have allocated the maximum allocation for ongoing schemes in next year’s ADP so that to provide its benefit to the people at the earliest and to reduce the throw forward liability.

The foreign aid consisted of Rs.30.69 billion grants and only Rs.4.30 billion loans on soft terms and conditions, he told the house. “We are thankful to the friendly countries and expect their cooperation in future too”, he added.In order to ensure fiscal discipline, the budget has been divided in three parts including Welfare, Development and Administrative.
The Welfare Budget comprises Rs.162.96 billion which is seven percent more than the current fiscal year.Similarly, development budget consisted of Rs.118 billion which is 17 percent higher than the outgoing fiscal year and administrative budget consisted of Rs.63.3 bilion which is 14 percent more than the current fiscal year.

The Finance Minister said that their government despite limited resources of the province announces to increase salaries and pension of the employees by 15 percent from July 2013.The minimum limit of the pension is being ncreased from Rs. 3,000 to 5,000.The Government will bear additional burden of Rs. 12 billion due to increase in salaries and pension.

Similarly, the minimum wage is being enhanced to Rs. 10,000 from 2013-14 and giving monthly wage below Rs. 10,000 would be considered a punishable offence.The government would implement the reforms being introduced in minimum ages, he told the house.The KPK government would start austerity measures from its own home, he said and added that it is norm of justice that high ranking officials should detached themselves from their personal business unless they are occupying the government functionaries so that they could not misuse their offices for their personal gains.

Referring to salient features of the proposed austerity measures, he said, expenditures of CM House, CM Secretariat, Governor House and Secretariat would be slashed by 50 percent from non-salary head.There would be total ban on medical treatments by the Governor, Chief Minister, Speaker, employees and MPAs in the foreign countries.However, in individual cases where treatment was not available in the country, the CM could consider such cases for approval.There would be total ban on purchase of new vehicles while POL expenditures would be curtailed by 15 percent.

Through Finance bill, Khyber Pakhtunkhwa Revenue Authority (KPRA) would be setup to ensure tax collection on scientific basis.Sales Tax on Services is being received through a vague ordinance which gave no guarantee to the tax payer.Through Finance Act, the said ordinance invoked since 2000 would   be repealed through a comprehensive system which would be tax payer friendly.The KPK Government on the basis of fee back it received from the people has proposed infrastructure cess in the finance bill for 2013-14 to restore the road infrastructure damaged due to use of heavy vehicles for export and import purposes.

He also announced giving five years more exemption on the property tax to the industrial units keeping in view the massive load shedding, unrest and decline in the industrial pace in the province.Finance Minister Sirjaul Haq told the house that the province was bestowed with God gifted natural water resources and added that we can generate 25000 megawatt electricity by initiating 20 hydel power projects.

We are trying to start some of the hydel project from our own resources but “ I also appealed to the government of Pakistan, Governments in Punjab, Sindh and Baluchistan and expatriates Pakistanis to invest in the energy related projects in the KPK for overcoming the problem of load shedding. “We are determined and sincere to change the destiny of this province. Our four party alliance in the province is based on unity, sincerity and strong will to serve the people and the province”.

The PTI led coalition government was all set to take revolutionary steps for elimination of corruption and first of all we will present ourselves to the people for accountability. We assure the competent and honest officials that they would not be fully supported and assisted in the performance of their duties and those found involved in corrupt practices would be taken to task.

We will not hesitate to go to the last extent in elimination of corruption and all the department heads will ensure judicious utilization of the government money. The head of the department would be responsible if any incident of corruption was reported in his institution. We will make the KPK an example for other federating units.He said that to take the accountability process to its logical end, establishment of an impartial commission was also under-consideration of the government wherein no one including Governor, Chief Minister, MPAs, bureaucrats,police officers, tax officers and bankers would be above the law. The features of the proposed self accountability system would be announced soon.

Approximately 11000 villages would be developed.The European Union has assured to provide 1000 million rupees for the development districts falling in Malakand Division while the KPK government has pledged Rs 500 million.The Finance Minister said that federal government being arbitrator should give constitutional right to the KPK by making payment of net hydel profit arrears.He expressed the confidence that the federal government would increase the annual net hydel profit which has been capped at Rs 6 billion from 1991.He complained that even Rs 6 billion was not paid to the province according to the schedule.

He also mentioned to the present government’s resolve for elimination of Patwari and Thana Culture.He said people of the province were extremely perturbed at the hands of the Patwaris and to abolish this culture, the government has started computerization of the land record in Abbotabad, Peshawar, D.I Khan, Mardan, Charsadda and Nowshera in the first phase.

The computerization process to complete in three to six months period, he added.No doubt our police courageously faced the scourge of unrest and bomb blasts and laid down their lives but our police stations did not fulfill the requirement of the present time.The present government has decided that the complainant would not go to Police Station for registration of FIR and instead it would be registered through phone call and online.

He said, special steps would be made for community associated with journalism and assured to their problems of free treatment at hospitals and media colony would be addressed on priority basis.The families of the journalists fall victim to unrest would be properly accommodated for which Rs 50 million have been allocated in journalist endowment fund. – APP