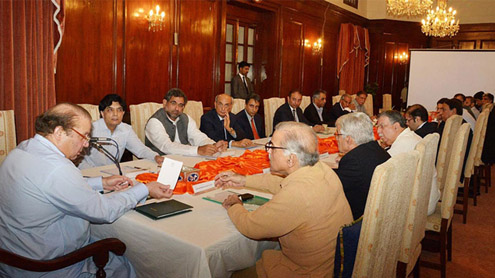 He was presiding over a meeting on energy situation here at State Guest House where he was given a detailed briefing on the energy situation in the country. A plan regarding reduction in load-shedding duration on monthly basis was also presented to the Prime Minister. “I have to put in place such initiatives that keep industrial wheel and the fan of everyone’s home on the move,” said Nawaz Sharif.

The energy sector is one of the major priorities of the PML-N government which would take all stakeholders on board to overcome the shortage, he maintained.The government has planned to retire gradually the power sector’s huge circular debt to streamline the electricity generation chain that would bring the loadshedding under control.Nawaz Sharif directed the authorities concerned to determine the viability of all the electricity projects besides, estimating and evaluating the financial requirements for their implementation.The prime minister also stressed the need for expediting work on the projects to ensure electricity generation at a low cost.
He called for getting rid of incompetent officials as well as useless machines to put the country on road to speedy development for bringing Pakistan at par with the developed nations.Nawaz also directed for taking stringent measures for stopping electricity pilferage.The newly-elected Punjab Chief Minister Mian Muhammad Shahbaz Sharif, Ishaq Dar, MNAs Chaudhry Nisar Ali Khan, Khawaja Muhammad Asif and Shahid Khaqan Abbasi, MPA Rana Muhammad Afzal, former caretaker federal minister Dr Musadiq Malik, Shaukat Tareen, Salman Shahbaz Sharif, Mian Muhammad Mansha Senator Pervaiz Rasheed and energy experts also attended the meeting. – APP
Tags: determine the viabilitPrime Minister Mian Muhammad Nawaz Sharif
Previous Post