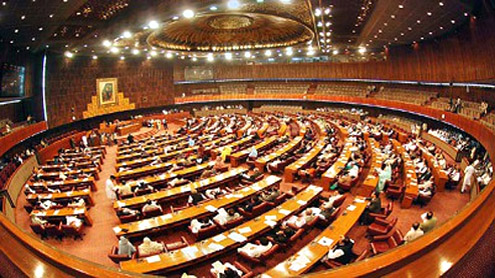 ISLAMABAD: The 14th National Assembly will elect the new prime minister of the country on Wednesday as three candidates have submitted their nomination papers in the NA Secretariat to contest for the top slot.

Among the candidates who have filed their nomination papers included Muhammad Nawaz Sharif of Pakistan Muslim League-Nawaz, Makhdoom Muhammad Amin Fahim of Pakistan Peoples Party Parliamentarians and Makhdoom Javed Hashmi of Pakistan Tehreek-e-Insaf. The candidacy of the PTI candidate Javed Hashmi has been proposed by Arif Alvi and seconded by Ghulam Sarwar Khan.

Seven nomination papers were filed for Nawaz Sharif those have been proposed and seconded by the parliamentarians from all the provinces including women and minorities.The nomination papers of Muhammad Nawaz Sharif were proposed by Mahmood Khan Achakzai, Pir Sadruddin Shah Rashdi, Ibadullah, Khawaja Muhammad Asif, Anusha Rehman Advocate, Khawaja Saad Rafiq and Philis Azim.