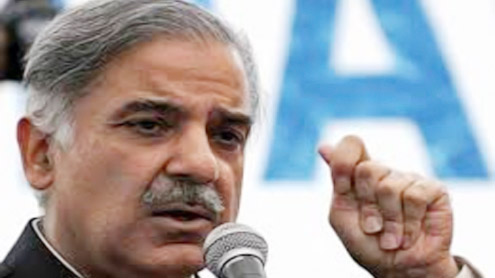 He stated this while addressing the meeting of parliamentary committee in Lahore on Monday. The Punjab parliamentary party in a resolution expressed full confidence in the leadership of Mian Nawaz Sharif and in another unanimously adopted resolution nominated Shahbaz Sharif as leader of the House.Shahbaz Sharif said the previous government looted national resources in the name of democracy.

The PML-N leader said that public expressed its anguish against corrupt rulers by voting them out and preferred the PML-N in general elections.“Almighty Allah has bestowed us with rule and power; now it is our duty to resolve public issues and take the country out of the challenging crises,” he added.Shahbaz Sharif said that he would chalk out a new strategy in consultation with all stakeholders for extermination of corruption from all departments.

Quoting a verse from the Holy Quran, newly nominated Punjab chief minister said that Allah forbids us to show disappointment and pessimism.“I hope that the PML-N government in the Centre and Punjab would succeed in handling issues faced by the nation,” said Shahbaz. He vowed to make Punjab a model province in the next five years. – DailyTimes