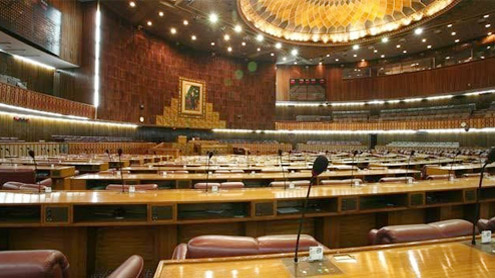 ISLAMABAD: The National Assembly (NA) will begin its session at 11:00 am in Islamabad on Monday (today) to elect its speaker and deputy speaker. The election for the two offices would be held through secret ballot.

Earlier on Sunday, Pakistan Muslim League – Nawaz (PML-N) nominated Sardar Ayaz Sadiq for the post of speaker NA and Murtaza Javed Abbasi for deputy speaker.After submitting his nomination papers for the post of speaker, Sadiq said that if and once elected, he would strive to run the house in an impartial manner.The three main opposition parties — Pakistan Peoples Party, Pakistan Tehrik-i-Insaaf (PTI) and Muttahida Qaumi Movement (MQM) — have all fielded their candidates for the posts of National Assembly speaker and deputy speaker against Sadiq and Abbasi of PML-N, the single largest party in the house.

The PPP has nominated veteran party leader from Umerkot Nawab Yousuf Talpur and Ghulam Rasool Koreja from Rahimyar Khan for the two posts; the MQM has fielded S.A. Iqbal Qadri and Kishwer Zehra and the PTI’s candidates are Shaharyar Afridi and Munazza Hassan.Talking to Media, PPP’s Syed Khursheed Shah said opposition parties had fielded their separate candidates because so far there had been no formal interaction among them for forming a combined opposition or adopting a unified stance against the government.

Shah, who has been nominated by his party as leader of the opposition in the National Assembly, said fielding candidates despite knowing the outcome of the elections was a healthy democratic exercise.Answering a question, he said he would soon contact MQM and PTI and there was a possibility that his party might withdraw its candidates in the larger interest of the opposition.“Yes, there is a possibility that we may withdraw our candidates and announce support for other opposition candidates,” he said, adding that they had time until the start of the election process on Monday morning.

The Jamiat Ulema-i-Islam-F (JUI-F) is yet to decide whether to sit on the treasury benches or the opposition.Keeping in view the party position, elections for the offices of the prime minister, speaker and deputy speaker will merely be a formality since the PML-N has acquired more than a simple majority in the 342-member National Assembly with a number of independents having joined it. – Dawn

Credit of strong democracy,smooth transition to power goes to all political forces:President Zardari