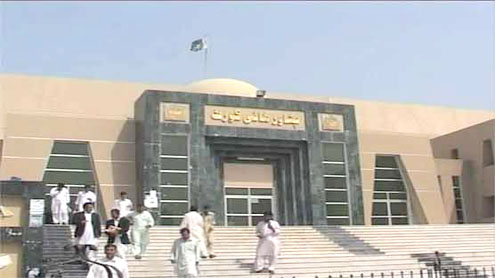 PESHAWAR, June 1: The alleged illegal detention of eight persons, including two transporters associated with transportation of Nato supplies from Pakistan to Afghanistan, was challenged before the Peshawar High Court on Saturday.

A habeas corpus petition was filed by a family member of the two transporters – Ikram Khan and Noorul Haq of Khyber Agency – against officials of Nowshera police, accusing them of keeping the transporters in illegal detention along with six of their workers since the night of May 29.The petition was filed through advocate Mian Muhibullah Kakakhel. The petitioner stated that the two detainees belonged to a family engaged in transport business and they had been supplying goods to the Nato forces in Afghanistan from Karachi.

The respondents include the provincial police officer, district police officer Waqar Ahmad, DSP Nowshera circle Waqar Khan and SHO of Pabbi police station Ijaz Khan.The petitioner claimed that on May 29 the detainees were shifting a sealed container from a damaged vehicle to another vehicle when the DPO, DSP and SHO along with a police team raided the place and took into custody the container and two cars bearing registration numbers WW-819/Islamabad and Peshawar 1853.

He alleged that the police Detention of Nato supply transporters challenged officials also took away the two transporters along with their six workers and since then their whereabouts were not known.The petitioner stated that the detainees had been taken away and detained illegally by all or one of the respondents. He pleaded that the arrest and detention of these persons was without jurisdiction and lawful authority and in violation of Article 9 and 10 of the Constitution.

The petitioner requested the court to direct the respondents to produce the detainees before this court and released forthwith.When contacted, an official at the Pabbi police station claimed that they had been conducting preliminary inquiry into the issue following which proper FIR would be registered. He conceded that the detainees were in their custody and had not been produced before any court of law. – Dawn