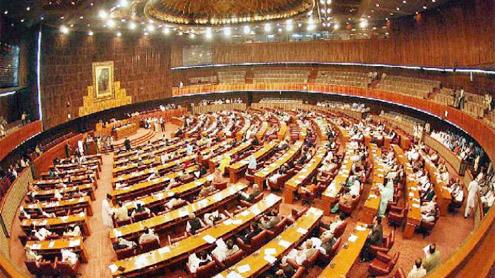 ISLAMABAD: A total of 323 MNAs-elect will take oath in the maiden session of the newly elected National Assembly today (Saturday), kicking off the process for transfer of power in the Centre.

This will be the 14th National Assembly in the country’s parliamentary history. The distinguishing feature of this assembly is that it would be first to take charge of power from the previous one in a smooth transition. The 13th National Assembly completed its five-year term on March 14, and following the caretaker set-up, the new assembly is going to hold its inaugural session in a peaceful transition of power. Outgoing Speaker Dr Fehmida Mirza will administer oath to the newly elected members.

Out of the total 342 members, 323 would take oath because of postponing of elections and pending decisions on various constituencies and reserved seats for women and minorities. The result of NA-269 is still awaited, whereas the polling on NA-83 and NA-254 was terminated due to the death of candidates on these two seats. The polling on NA-38 was postponed and results of NA-103 and NA-237 have been withheld. The Election Commission of Pakistan (ECP) has ordered re-election at some polling stations of NA-46 and NA-229.

Meanwhile, eleven seats reserved for women and minorities are yet to be filled. The Pakistan Muslim League-Nawaz has a comfortable majority with 176 seats in the House followed by Pakistan People’s Party Parliamentarians (PPPP) that has 39 seats, and Pakistan Tehreek-e-Insaf (PTI) with its 35 seats. The Mutahidda Qaumi Movement (MQM) has 23 seats in the Lower House and Jamiat Ulema-e-Islam-Fazl (JUI-F) has 14 seats. Pakistan Muslim League Functional (PML-F) has six seats. The Pakhtunkhwa Milli Awami Party (PMAP) and Jamaat-e-Islami (JI) have four seats each, while the National Peoples Party (NPP) has won three seats.

For the election of the prime minister, the nomination papers would be filed on June 4 and the polling will be held on June 5. Elaborate security arrangements have been made in the federal capital, especially in the Red Zone, for the first session of the National Assembly, with extra security personnel guarding the checkposts situated in the areas surrounding the Parliament House. The Parliament House has been renovated to welcome the new members of its Lower House.