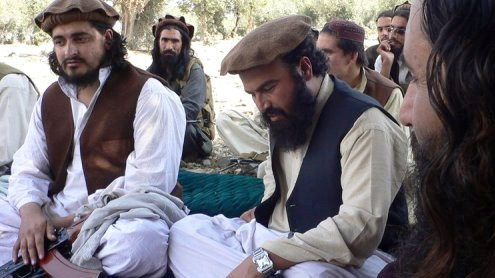 PESHAWAR: The Tehrik-i-Taliban Pakistan has announced that they are withdrawing their offer of peace talks following the death of Waliur Rehman in an American drone attack.

Ehsanullah Ehsan confirmed to an American news agency in a telephone call from an undisclosed location Thursday that the group’s second-in-command, Waliur Rehman, was killed Wednesday in an American drone attack in the tribal areas of Pakistan.The Taliban had said earlier that it was open to peace talks with the newly elected Pakistani government.But Ehsan said Thursday that the Taliban believes the government approves of the drone strikes so they are withdrawing their offer of peace talks.

The Taliban will avenge the death of group’s No. 2 leader, Ehsanullah Ehsan told CNN. He said the group holds the Pakistani government responsible for the death of Waliur Rehman Mehsud. The Pakistani Taliban will not accept any offer from the government for a peace dialogue, Ehsan said.Ehsan said Rehman – now buried in a secret North Waziristan location – was wanted by the United States on suspicion of being involved in the December 2009 suicide bomb attack that killed seven CIA employees at Forward Operating Base Chapman in Khost, Afghanistan, according to a publication by the US National Counterterrorism Center.Meanwhile, the Pakistani Taliban have chosen a new deputy commander to replace their previous second-in-command who was killed in a US drone strike, sources in the militant group said on Thursday.

A Pakistani Taliban committee met late on Wednesday to choose a new deputy after Waliur Rehman was buried in a low-key ceremony, three Taliban members told Reuters. The Taliban members said the new number two, Khan Sayed, 38, also known as Sajna, had served as Rehman’s deputy. He was involved in planning a 2011 attack on a Pakistani navy base in Karachi in which 18 people were killed and a 2012 jail break in which nearly 400 militant inmates escaped, they said. “There was absolute consensus over Khan Sayed,” one Pakistani Taliban member said.

Wednesday’s drone strike, that killed six other people, was the first in Pakistan since a May 11 general election in which strikes by the unmanned US aircraft was a major issue.It was also the first reported US drone strike since President Barack Obama announced last week that the United States was scaling back the drone programme.The Pakistani Taliban are a separate entity to the Afghan Taliban, though allied with them. Known as the Tehreek-e-Taliban Pakistan, they have launched devastating attacks against the Pakistani military and civilians.

Waliur Rehman had been tipped to succeed Hakimullah Mehsud as leader of the Pakistan Taliban and had been viewed as someone less hostile to the Pakistani military than some other top operatives.While his death is a major blow for the militants, it could be also viewed as a setback for incoming prime minister Nawaz Sharif’s efforts to end violence.He criticised drone strikes during the election campaign, describing them at one point as a ‘challenge’ to Pakistan’s sovereignty. Sharif also offered to hold talks with the militants.

“Waliur Rehman was a serious and mature man, his death could hurt prospects for an expected peace initiative considered by the new government,” a security official told Reuters.However, many observers said any meaningful settlement with the Taliban was unlikely in any case given Sharif’s condition that the starting point for talks be respect for the country’s democratic order and institutions.The White House did not confirm the killing, in line with its practice not to discuss drone strikes.

But its spokesman Jay Carney said Waliur Rehman “has participated in cross-border attacks in Afghanistan against US and NATO personnel and horrific attacks against Pakistani civilians and soldiers”.Drones armed with missiles have carried out numerous strikes against militants in the North Waziristan Pashtun tribal region over the past seven years, sometimes with heavy civilian casualties.A US drone killed Pakistani Taliban commander Baitullah Mehsud in 2009. There had been several reports that his successor, Hakimullah Mehsud, was killed the same way but they turned out to be false.North Waziristan has long been a stronghold of militants including Afghan Taliban and their Al-Qaeda and Pakistani Taliban allies. – Nation