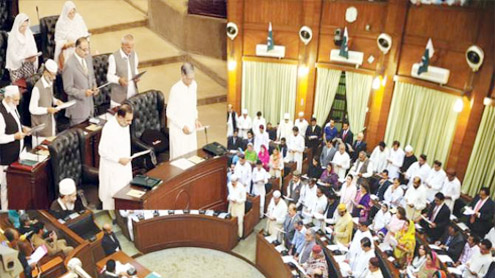 PESHAWAR: The newly elected members of provincial assembly (MPAs) here Wednesday took oath of their membership during the inaugural session of the KP Assembly.

Outgoing speaker, Kirmatullah Khan administered oath to the newly elected MPAs and later signed the register.  Out of 124 MPAs of the House, 121 MPAs took oath today while former Chief Ministers Akram Khan Durrani and Amir Haider Khan Hoti who did not take oath as they are likely to retain their National Assembly seats of NA-26 Bannu and NA-9 Mardan respectively.

Similarly, a female MPA of JUI(F), Naeema Ahktar also not took oath from provincial assembly seat and is likely to join national assembly as MNA. Naeema will be replaced by Romana Jalil daughter of Jalil Jan, Provincial Information Secretary of JUI(F).In KP Assembly, Pakistan Tehreek e Insaf has emerged as the majority party and has nominated senior politician and Central Secretary General PTI, Pervez Khan Khattak for the office of Chief Minister. The party has nominated its provincial president Asad Qasir for the office of Speaker.

Tough security arrangements have been made for this important occasion. On Wednesday morning, the newly elected MPA started arrival to the Peshawar for taking oath. The hall was jam packed as a lot of visitors arrived to attend the maiden session. Even newsmen were unable to find seat in the house for covering proceedings while the ladies gallery was fully occupied by male visitors. Nomination papers for the office of the new Speaker and Deputy Speaker of the Provincial Assembly will also be filed in the session.

The outgoing speakers Kirmatullah Khan congratulated the newly elected MPAs on this occasion and expressed optimism that they would work day and night for progress and development of the province besides addressing problems of the people.He said it is very auspicious occasion that an elected government successfully completed its five year tenure and now power is being transferred to newly elected government. This smooth transition of government will strengthen and nourish democratic process in the country.

He said great expectation have been attached by people from the newly elected parliamentarian to address their problems and are hoping for a positive change in society and system.The future government has to focus on tacking the menace of corruption, lawlessness, electricity load shedding, illiteracy and poverty for which the new government has to work hard and adopt a holistic approach.Others who spoke on the occasion included Sardar Hussain Babak of ANP, Shaukat Yousafzai of PTI, Mufti Janan of JUI(F), Nighat Orakzai of PPP, Uzma Khan of JUI(F) .In their speeches the MPAs congratulated election of new government.They all held out their assurance for full cooperation in resolution of people’s problem besides smooth running of the house.Later the Speaker adjourned the assembly session for Thursday morning at 10:00 am. – APP