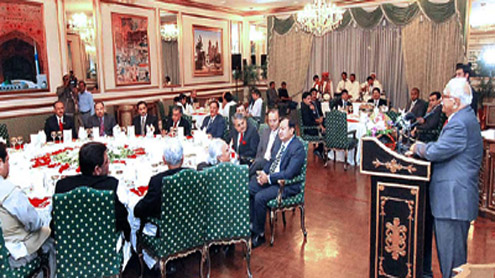 Addressing a farewell reception given in his honour by Prime Minister Secretariat staff here, he said conducting elections was an uphill task but the caretaker regime was committed to neither delay nor postpone the elections.The Prime Minister said though the mandate of caretakers was to hold free, fair and impartial elections but at the same time it faced many national issues such as law and order situation, power shortage and economic problems.

He recalled that except for Punjab the law and order and security situation in other three provinces remained unstable, and it was quite difficult for the government, which was formed for a few months, to face such a tense situation.Prime Minister Khoso said the caretaker regime, besides concentrating on holding elections also worked hard to address some other problems.

“I and my cabinet members were committed to holding elections through thick and thin, which was our mandate and we delivered our responsibilities in an efficient manner,” he said.The Prime Minister said now elections have been held, new political leadership is going to form a government and it would be its duty to focus on masses’ problems and ensure relief to them.The Prime Minister thanked all his cabinet members who worked hard and assisted him in conducting the elections in the country successfully.

He said the caretaker government was handed the responsibility of holding elections. “We had no experience and we did not know how to proceed. But, with the help of my colleagues we were able to overcome challanges.”He said, “Our dilemma, if election were not held, there was no way out. Our task became more daunting when we had to carry out work that was the primarily responsibility of the Election Commission of Pakistan.”

Further, federal government had to over see and maintain law and order responsibility, which was the responsibility of the provincial government, he added.The prime minister said that the government had resolved to hold elections,come what may, and it succeeded in holding elections because it believed that the problems facing the country could only be solved by the elected representatives of the people. – APP