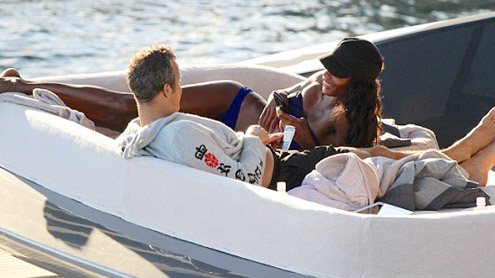 Supermodel Naomi Campbell is busy at work in London following a break-up from her Russian billionaire love Vladimir Doronin.

The British-born model, 42, is believed to have moved out of Vladimir’s multi-million dollar home in Moscow and is currently filming the Brit version of her hit TV show, The Face, in the Capital.MailOnline revealed how their relationship faltered as businessman Vladimir, 50, became a firm fixture on the New York social scene.

Just weeks ago, he was pictured lounging alongside a Naomi-lookalike on board a yacht – who can be revealed as Miami model Jazzma Kendrick – and he has now joined good friend Leonardo DiCaprio on the Spanish party island of Ibiza.And a New York friend told MailOnline today: ‘This is the guy that Naomi thought she was going to marry – but he’s busy gallivanting with Leonardo DiCaprio in Ibiza. They were in Cannes together and now they’ve just carried on partying.

‘Naomi’s busy working in London and she’s living there while she films The Face. She doesn’t want this party lifestyle – for her, that’s just work.’Earlier this month, Vladimir was joined by Jazzma, 23, off the shores of Miami, and the couple looked cosy.Jazzma, who had donned a purple bandeau bikini and baseball cap, lay near him as they soaked up the sun.However, the leggy model – who even posted a picture of herself walking down a runway doing the ‘Noami (sic) Campbell Walk’ – was forced to post a series of tweets angrily denying any romance with Vladimir.She wrote: ‘No, I’m not dating Vlad, No, I’m not his ‘side chick’, no, didn’t f**k, No, I’m not an escort, nor have I ever been.’

And yesterday, the statuesque model, who is often seen out on the town in trendy South Beach, added: ‘I will never understand why ppl be mad for no reason??? Can someone explain?’Vladimir has now checked into a five-star hotel in Ibiza and is spending time with Oscar nominee Leo, 38, aboard his yacht.Leo has been joined by a string of female friends on board his boat while partying in Cannes during the film festival over the past few weeks and is now on the party isle.And while her ex is busy sunning himself, Naomi has been shooting scenes for her hit TV show The Face which is she bringing to the UK on Sky Living following its success Stateside.The model looked more than happy as she got to work alongside Erin O’Connor and Caroline Winberg, and the ‘split’ looked the furthest thing from her mind.

Reports emerged recently that Naomi and Vladimir are going through a rough patch, with a source telling The New York Post: ‘Naomi and Vlad have broken up, and he’s been out partying in New York.’Naomi and Vlad have a complex relationship, and sometimes break up and make up. In many ways their relationship is like a business arrangement.”Naomi brings glamour to his hotels and properties, and he treats her extremely well. But they spend a lot of time apart due to work commitments.’

And another source in Manhattan who has seen Vlad on the town told MailOnline: ”It’s incredible, they were talking about babies and marriage before Christmas and they were so in love, so it’s quite shocking that things have gone downhill so fast.The last time Naomi and hotel and property mogul Vladimir were pictured together was on Miami Beach in March. – DailyMail