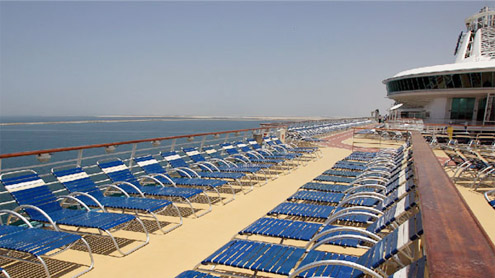 Aspiring to give every passenger a best-ever cruise experience, Royal Caribbean International’s groundbreaking Voyager-class ship Mariner of the Seas, will begin its maiden Asian journey from Singapore in June.

The grand liner docked on Friday on its voyage from Dubai to Singapore. It will dock at Kochi on Sunday before heading for Singapore, from where it will begin its maiden Asian journey June 1.The Mariner of the Seas was launched in 2003. Some of its offerings this year include a three-night trip to Malaysia from Singapore, a four-night Best of Malaysia Cruise and a five-night Spice of South East Asia Cruise.The market for Asian cruises is increasing year by year, said Ratna Chadha, chief executive, TIRUN Travel Marketing, the exclusive India representative of Royal Carribean International.

“Over the past one year, Royal Carribean International’s guest capacity in Asia has witnessed a three fold increase,” Chadha said here during the announcement of the cruise here.With a length of 1,020 feet and width of 157.5 feet, Mariner of the Seas has a passenger capacity of 3,807. The onboard atmosphere personifies an urban city outlook that offers leisure, sports, entertainment, dining, and kids’ entertainment – all under one roof.

Some in-house experiences include an ice-skating rink with 900 seats, eight dining venues, sports facilities including a jogging and inline skating track, rock climbing wall, a mini golf course, basketball court and three poolsAlso, the ship has exciting entertainment to offer, especially thanks to the cruise’s alliance with DreamWorks. Guests may enjoy 3D screening of shows, parades and even get a chance to meet and have their photo taken with their favourite DreamWorks characters like Madagascar’s Alex and the penguins, Shrek, Fiona and more.

Other notable spaces on board include a three-storey Savoy Theatre; a medieval-themed disco called the Dragon’s Lair; the Boleros Latin-themed lounge and nightclub; and the elegant Viking Crown Lounge.There are also shopping facilities and that too on a duty free rate. From leading brands jewellery, perfume and apparel brands, there’s a huge variety for shopaholics. – KhaleejNews