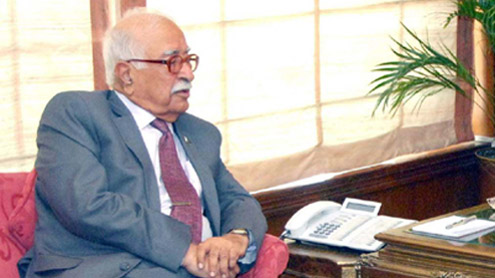 ISLAMABAD: Advisor on Finance Dr. Shahid Amjad Chaudhry on Monday informed Prime Minister Justice ® Mir Hazar Khan Khoso that in compliance of his instructions, an amount of Rs10 billion was being released to the Ministry of Water and Power for supply of fuel to the thermal power plants.

He further said that the remaining package approved by the Prime Minister would be implemented strictly in accordance with his instructions and on schedule.The Advisor on Finance was briefing the Prime Minister in a high level meeting held at the Prime Minister’s House to review the overall energy situation in the country.The Prime Minister directed the concerned authorities that all formalities pertaining to generation and production of 56.4 MW Wind Power Project, installed by Zorlu Energy Group, a Turkish Company, at Jhampir, should be completed without delay and it be connected to the national grid system within 48 hours.

Muzaffar Abbasi, CEO HESCO, informed the meeting that transmission lines had been laid and were ready to transmit electricity from the Wind Mill Project to the national grid.It is to be mentioned here that Turkish Ambassador to Pakistan, Mustafa Babur Hizlan who met the Prime Minister on last Friday had told him that the Wind Mill Project was ready for energization.The meeting was attended by the senior officials of the Prime Minister’s Secretariat and the Ministries of Finance and Water and Power. – APP