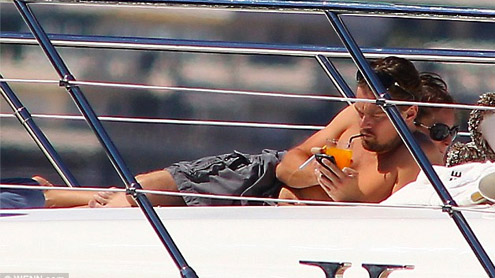 Move over Jack Nicholson, not only has Leonardo DiCaprio got his impression of the famous actor down he is also imitating – and surpassing – his Hollywood playboy ways.

In a move that would have made the older notorious womaniser proud, Leo made sure to do the Cannes Film Festival right – surrounded in models wearing barely there bikinis and hot pants.The 38-year-old threw himself a yacht party on Thursday – and made sure to invite plenty of women.Sunning himself in the beautiful South of France sunshine, the Django Unchained actor relaxed as the women tanned and chatted around him.Taking off his shirt and showing off his less than muscular physique, the A-lister was happier than a pig in mud alternating between smoking, having some fruity cocktails and chatting to the stunning group of women.

With The Great Gatsby’s premiere in the earlier days of Cannes, the star clearly was not too concerned about what was going on back on shore.On occasion the actor did manage to pull himself away from all the female attention – even one woman who danced around in a bikini which was more thong than swimsuit – to check his phone.He also did allow a couple of – very lucky – male friends aboard and enjoyed some time chatting and smoking without the ladies present.But showing that he was the main man of the boat, the Gatsby star seemed to single out one particular woman for some one-on-one time.Clearly comfortable with each other the pair reclined on some large cushions on the bow of the boat soaking in the French Riviera sunshine.

The brunette beauty lay beside the shirtless Leo, obviously not caring about his more rotund waistline that he has developed recently.The woman made sure to pay attention to the actor, laughing at what he saying, but then when Leonardo had to check his phone, she went back to reading a magazine.Later when the actor went off to attend to something on the gorgeous vessel, the woman went topless to ensure she got an all over tan.A smiling Leo was clearly in a great mood and of course he had no reason not to be.

And not only was he surrounded by women, the star got to enjoy all the Mediterranean Sea has to offer aboard a multi-million dollar yacht – that he did not even have to pay for.The giant vessel actually belongs to Sir Phillip Green the owner of Topshop.The 206ft yacht, named Lion heart, is worth a staggering $37million and has hosted numerous celebrities including Naomi Campbell, Gwyneth Paltrow and Kate Hudson and Kate Moss and husband Jamie Hince had their honeymoon aboard as well.But it is not just luxury yachts Leo is getting a free ride on.This week a Russian billionaire paid $1.5million to buy a Virgin Galactic flight to the edge of space with Leo as his travel companion at the amfARa Cinema Against AIDS action.