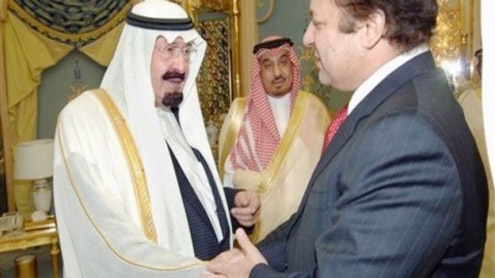 Saudi Arabia is expected to extend a bailout package of about $15 billion to Pakistan’s highly indebted energy sector by supplying crude and furnace oil on deferred payment to enable it to resolve the chronic circular debt issue.

A senior government official said the Saudis had been taking reasonable interest in helping out the incoming PML-N government led by Nawaz Sharif.According to the official, as soon as the PML-N emerged as the majority party after the May 11 elections, the Saudi ambassador in Islamabad sought a briefing on the country’s oil requirements from the foreign ministry before calling on prime minister-designate Nawaz Sharif in Raiwind, Lahore.

He was immediately provided a position paper, the official said.Pakistan expects about 100,000 barrels of crude oil and about 15,000 tons of furnace oil per day from Saudi Arabia on deferred payment for three years. The amount involved works out at about $12-15bn.

The facility can be utilised to reduce loadshedding in the short term and provide an opportunity in the medium term to restructure the power sector by minimising subsidies, eliminating circular debt, ensuring recovery from the public sector and reducing system losses to bring it to a self-sustainable level.The official said a request had already been passed on through the Pakistan-Saudi Arabia Joint Ministerial Commission. A meeting of the commission could be convened soon after the new government assumed charge, an official said.The Saudi rulers had not taken any interest in the issue earlier ostensibly because of the chill in their relationship with the PPP government. – PT