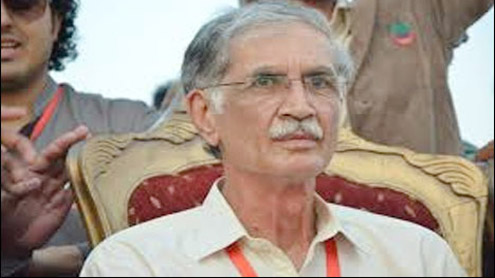 PESHAWAR: Khyber Pakhtunkhwa’s MPAs-elect will take oath on May 29 which will be followed by the election of speaker and deputy speaker, while the provincial chief executive will be elected on May 31, chief minister-designate Pervez Khattak revealed on Thursday.

He gave these details after welcoming independent MPAs-elect Mushtaq Ghani and Qalandar Lodhi from Hazara region and Samiullah Alizai from Dera Ismail Khan district who joined the Pakistan Tehreek-e-Insaf, which is all set to rule Khyber Pakhtunkhwa. Khattak said the schedule for oath-taking of MPAs-elect, nomination of chief minister, speaker and deputy speaker was approved and the governor would convene the meeting of Khyber Pakhtunkhwa Assembly on May 29.

The Khyber Pakhtunkhwa chief minister-designate said the PTI had a total of 41 members at the present and two more independent MPAs-elect would join the party soon. “We will now form a strong government in coalition with Jamaat-e-Islami and Qaumi Watan Party,” he said. “We will rule the province for next five years and also contest the next elections with coalition partners,” he added.

Khattak promised zero tolerance against kidnapping, street crimes and dacoity to end the feeling of insecurity among the people. He categorically made it clear that no compromise would be made on peace and law and order situation. He said PTI’s government in Khyber Pakhtunkhwa would be a role model for other provinces.

The chief minister-designate said cruelty in any form, injustice, corruption and favouritism would not be tolerated by his government and reforms would be introduced for the betterment of education, health services, local government and police system. “PTI’s goals are not to get government but to serve masses irrespective of political affiliation with best of our abilities and we would use all energies so that people could see tangible and positive changes,” Khattak added. – DailyTimes