Political big-wigs catch up at luncheon for Chinese Premier 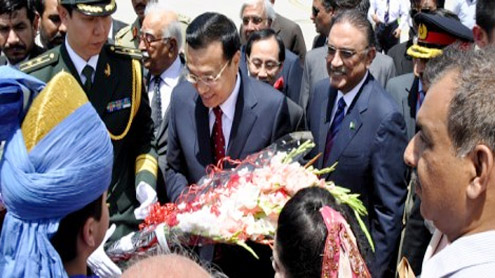 Political big-wigs catch up at luncheon for Chinese Premier

ISLAMABAD: The luncheon hosted in honour of Chinese Premier Li Keqiang here at the Aiwan-e-Sadr on Wednesday turned out to be an opportunity for political ‘friends and foes’ to sit together.

At the main luncheon table, Mian Nawaz Sharif sat next to President Asif Ali Zardari at his right, while Premier Li and Prime Minister Mir Hazar Khoso were seated at the President’s left.Many of the politicians from different parties greeted and embraced each other, whereas some were seen avoiding encounters.The politicians witnessed the investiture ceremony of the Chinese Premier, who was conferred on Nishan-e-Imtiaz by President Zardari. – APP

SC suspends all transfers‚ postings made by caretaker govt

SC suspends all transfers‚ postings made by caretaker govt