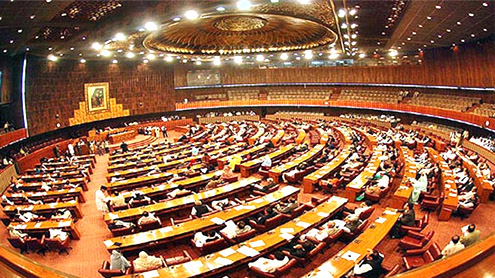 ISLAMABAD: The Pakistan Muslim League-N has the highest number of women legislators elected on general seats in the recent elections, and that too from Punjab, but not a single woman could win in Khyber Pakhtunkhawa.

Analysts and rights activists working on gender issues have raised concern over problems faced by female candidates, polling agents and even the polling staff in several parts of the KP.A meeting of the National Commission on the Status of Women, presided over by its chairperson Ms Khawar Mumtaz, urged the Election Commission on Thursday to order re-poll in areas where women were not allowed to vote.

The European Union Election Observer Mission has said that only 3.4 per cent of candidates on general seats were women.Voters in Punjab have emerged as the most unbiased towards women as they elected 11 legislators, all belonging to the PML-N, while the lone female elected from Balochistan is also from the same party.According to data compiled by The Researchers in collaboration with the Pakistan Governance Forum and Women & Politics in Asia Forum, six women – three each from the PML-N and the PPP – have so far been elected as MNAs.Eight women in Punjab and one each in Sindh and Balochistan have made it to the provincial assemblies, but none in KP.

About 150 women, 60 of them on party ticket, contested the elections in 111 National Assembly constituencies.Over 310 women, 213 of them on party ticket, filed nomination papers in 213 constituencies of the four provincial assemblies.In the 2008 elections, 16 women had been elected as MNAs and 10 as MPAs.In the last week’s elections, Sumaira Malik of the PML-N bagged 118,108 votes from NA-69 Khushab and Ghulam Bibi Bharwana of the same party obtained 87,002 votes to win NA-88 Jhang-Chiniot seat.Saira Afzal Tarar, also of the PML-N, got 93,013 votes in NA-102 Hafizabad.

The PPP’s Dr Azra Fazal obtained 111,667 votes from NA-213 Nawabshah and her elder sister, Faryal Talpur, 83,916 votes from NA-207 Larkana. Both are sisters of President Asif Ali Zardari. The third PPP candidate, Dr Fehmida Mirza, got 110,684 votes from NA-225 Badin.All the six women had also won the 2008 elections, which Ms Malik and Ms Bharwana had contested on PML-Q ticket.Ms Malik, Ms Bharwana, Dr Fazal and Dr Mirza were also victorious in the 2002 elections.