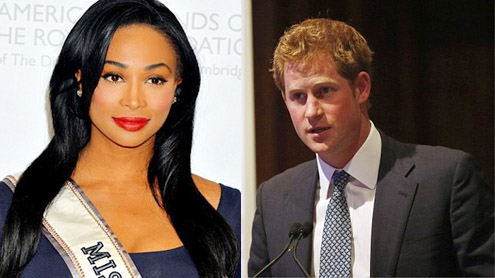 He’s known for his cheeky smile, his fiery hair and his predilection for a good party.But it’s Prince Harry’s height – a lofty 6ft 2in – that has caught the eye of his latest admirer… none other than Miss USA Nana Meriwether.

Attending a celebrity-studded fund-raising reception at Manhattan’s famous Four Seasons Restaurant alongside the Prince, the raven-haired beauty (officially 6ft 1in, but 6ft 4ins in towering Zara heels) declared she was technically royalty in America, and wondered if William’s younger brother was single… and if he might be interested in making an honest woman of her.She said last night: ‘He is doing a wonderful job of representing your country here. Miss USA is like royalty in the States, so I am really hoping to meet him.

‘He is single, right? Well so am I. Wouldn’t it be wonderful if we married. And he is very tall and good looking, I hear. Perfect. We are meant to be.’ Celebrities and the super-rich queued last night to dine with the Prince, Manhattan’s man of the moment.The 28-year-old was guest of honor at a glitzy  reception thrown by the American Friends of The Royal Foundation of The Duke and Duchess of Cambridge and Prince Harry.

Sean Lennon told Mail Online: ‘It’s great that he is here. He seems to be really enjoying it. But it seems as if the whole city is running around trying to spot him, so I hope he doesn’t think New York is always like this.’He is well loved here.’ The Voice judge Will.i.Am arrived after Harry, wearing a burgundy suit and hat and a wild pair of silver studded shoes.He told Mail Online: ‘I am a fan of how Queen Elizabeth raised her children and how they have raised their children.’I am a great admirer of Prince Charles and his charity work and I think it is incredible Harry has made it part of his legacy to carry this on. He doesn’t have to do what he does, so I applaud him.’

The Black Eyed Peas star and producer met the prince after last year’s Diamond Jubilee concert at which he performed and has supported Prince Charles’s charity work.He added: ‘He’s a party prince, a soldier and a philanthropist. He”s a regular guy. If Harry was a movie character he would be Iron Man.’I grew up watching documentaries about the Royal Family so I am really pleased to be meeting him.’Established in 2001, the Royal Foundation is a charitable organization set up by the royal trio to channel their philanthropic activities.They intend to concentrate their efforts in three main areas; veterans and military affairs, conservation and sustainable development and children and young people.

In a foreword to the evening, Harry congratulated the American Friends for making its first US grant to the Harlem RBI baseball scheme he had visited earlier in the day. Guests dined on heirloom tomato and buffalo mozzarella, filet mignon with maitre d’hotel butter and asparagus and a trio of desserts including bar room chocolate cake, strawberry shortcake and individual lemon tarts.The evening kicked off with a cocktail reception followed by dinner with a speech by the prince.Nick Booth, chief executive of the Royal Foundation, said more than $1/2 million dollars had already been raised.Inside the venue the dining area – which had marble pool in the centre of it bedecked with shimmering tea lights – some of the wealthiest men and women in the city vied for the prince’s attention.

Many of the women were wearing designer cocktails dresses, Louboutin shoes and covered in diamonds.Harry was sat at a table with senior figures from his charity  as well as popstar Will.i.Am.In his speech the prince paid tribute to his Foundation’s US arm: ‘Thank you, from William, Catherine and me.  You are such an important part of our Foundation family,’ he said.He highlighted the success of Coach Core, the Foundation’s initiative training young people to become an ‘inspirational new generation’ of sports coaches.He added: ‘Almost a year ago – on the day before the London Olympics – The Royal Foundation launched Coach Core.

‘This flagship initiative seeks to mentor and train our next generation of truly inspirational young sports coaches.’The aim is that they, themselves, will then become mentors and role models to their peers and further generations over the years ahead.’We now have pilot schemes running in London and Glasgow in Scotland – and I am delighted to announce that funds raised this evening will support a similar programme to be run in partnership with Harlem RBI here in New York, and potentially others like it.

‘It is exciting that Harlem RBI’s Project Coach and our Coach Core will be linked in this way, sharing experience and lessons learned to provide opportunity and inspiration to disadvantaged young people here and back home Britain.He added: ‘I visited the project in Harlem this afternoon, and met many of these young people whose lives are being changed through the power of sport.  As they learn and grow under the careful guidance of Harlem RBI, they represent living proof of what can be achieved.  It was truly uplifting.’So, sport and coaching really does change lives. ‘ – DailyMail

Finding heaven in the Himalayas

Finding heaven in the Himalayas