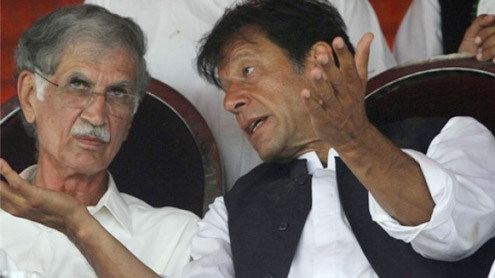 Even though Khattak had been previously been nominated, the party was split over the matter. A PTI spokesperson in Peshawar also confirmed this.On Wednesday evening, the matter went to the party chairman Imran Khan for a decision who decisively ruled in the favour of Khattak.Previously, the main contenders for the slot had been PTI Central General Secretary Khattak and provincial president Asad Qaiser. Supporters of both candidates were lobbying to gain the loyalties of elected PTI MPAs.

“Our support for the CM seat is with Asad Qaiser as he is an ideological activist who worked hard to strengthen the party,” said the PTI Central Deputy Information Secretary and winning candidate from PK-10 constituency, Shah Farman. “He deserves to be the next CM.”However, sources privy to the matter told The Express Tribune the party is divided over who to nominate, with Provincial General Secretary and winning candidate from PK-2 constituency Shaukat Yousafzai’s group throwing its support behind Khattak. – Tribune