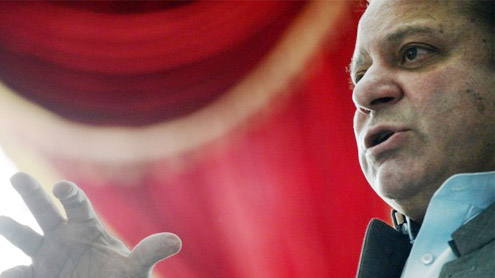 LAHORE: The elections are over with, and now the task of governance is about to commence. To this end, Nawaz Sharif on Monday constituted two high powered committees; one to file a report on the Centre, Baluchistan and Sindh, while the second will focus on Punjab.

Sharif held a party meeting at his Raiwind residence where the party’s senior leaders Chaudhry Nisar Ali Khan, Ahsan Iqbal and Rana Sanaullah, among others, were in attendance. The meeting came up with a sketch of what the future government will look like. Here are some of the decisions that have been made: Nisar Ali Khan’s task is to contact independent candidates who won national assembly seats from across the country and determine their terms and conditions. Shahbaz Sharif will assist him and he will deal with independent NA candidates who won from Punjab while Nisar will contact independent candidates from Sindh, K-P and Balochistan.

The Nisar-led committee will also suggest names of the National Assembly speaker and deputy speaker, and also the chairpersons of various NA committees to the party leadership. Apart from this, the committee will communicate with the caretaker setup to decide which day the National Assembly session will be convened.Various independent NA seat winners, including Chaudhry Ejaz and Tahir Iqbal from Mandi Bahauddin, met Shahbaz Sharif in Raiwind and assured him of their support.

Apart from these, Siddique Baloch, Abdul Rehman Kanju, Dr. Afzal Dhandla, Nazir Sultan and Raza Hiraj are also set to meet Shahbaz Sharif on Tuesday.PML-N’s leader Rana Mashhood Ahmad Khan has been given the job of handling Sindh by Nawaz Sharif.  Mashood is currently in Kaarachi, and has been tasked with negotiating with independent candidates and disgruntled members of other parties to try and get them to join the PML-N. Once his job is done, he will submit his report to Nawaz Sharif and Chaudhry Nisar.

His counterpart in Balochistan is Ayaz Sadiq, who defeated PTI’s chief Imran Khan in NA 122 Lahore. Sadiq has been appointed by Sharif to look after party affairs in that province and to negotiate with other political parties in that province to form a government.He is fully empowered to offer portfolios of various cabinet slots, and also the positions of speaker and deputy speaker of the Balochistan Assembly to the political parties of the province.After completing this task, he too will submit his report to Sharif and committee heads. Nawaz Sharif will personally look after this committee.

The second committee, which is focused on Punjab, is headed by Rana Sanaullah Khan and is comprised of Khawaja Ahmad Ehsan and Mian Mujtaba Shujaur Rehman. The mandate of the committee is to contact independent MPAs. Ehsan is considered an expert deal-maker and the architect of the Unification bloc in the Punjab Assembly’s previous term.This committee will suggest the Punjab speaker and deputy speaker, and will contact around 41 independent MPAs to get them to join the party in Punjab. Although the PML-N does not need any additional members in the house as it has bagged more than 210 MPAs out of a total 297 MPAs. According to details twelve Independents who won PA seats will join PML-N.PML-N is not willing to replace Punjab Assembly speaker Rana Muhammad Iqbal as he is trusted by the party, and is considered to have played a vital role in the past. – Tribune