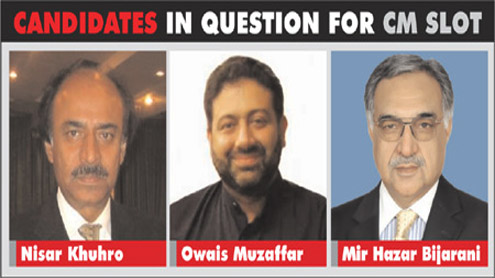 KARACHI: The Pakistan People’s Party (PPP) on Monday kicked off consultations for formation of its government in Sindh, after it presumably got majority votes in May 11 elections in the province.

The party has also invited its former coalition partner, the Mutahidda Qaumi Movement, to join PPP-led coalition in the province.The development came at a high level meeting of PPP leadership at Bilawal House here on Monday. Senior leaders of the PPP, Syed Qaim Ali Shah, Agha Siraj Durrani and others attended the meeting.Later, the Sindh Governor
Dr Ishratul Ibad Khan also made it to the meeting for discussion. It was the first formal contact of PPP with MQM through Dr Ibad.

President Asif Ali Zardari was also present at Bilawal House on the occasion. According to the party sources, PPP leadership formally invited MQM for joining coalition with PPP in the Sindh government.The sources confided to Daily Times that Dr Ibad told PPP leaders he would convey the invitation to party leadership, and subsequent strategy will be decided by the party officialdoms.The sources said the PPP wanted to include MQM into the coalition government as its major partner.

The Election Commission of Pakistan has yet not released all official results of several provincial assembly constituencies, however, the PPP and MQM have claimed that both the parties have retained their previous positions as first and second largest parties in the Sindh Assembly in May 11 general elections.The party sources said that PPP leaders would also contact Pir Pagaro led PML-F and other parties having representation in the Sindh Assembly to consult on formation of the provincial government. A committee headed by former Sindh chief minister, Syed Qaim Ali Shah will hold deliberations with other parties.

According to PPP sources, the meeting also discussed the names of candidates for the slot of Sindh chief minister. In this regard, names of some party leaders and personalities came under discussion at the meeting. Those include former federal minister, Mir Hazar Khan Bijarani; President Asif Ai Zardari’s foster brother, Owais Muzaffar alias Tappi; and former speaker of the Sindh Assembly, Nisar Ahmed Khuhro. Names of Bijarani and Khuhro came under discussion due to their seniority and experience.

However, Tappi’s name was considered for the slot as he enjoys confident of President Zardari due to his old relationship with Zardari family. Sources add that Tappi candidature for chief minister slot will also be acceptable to MQM. The MQM leadership has already demanded an Urdu speaking candidate for the slot this time. He is first Urdu speaking candidate for the slot of Sindh CM in the history.Meanwhile, in a statement issued here, the PPP leader Nisar Khuhro said his party would again form its government in the province; however he maintained PPP did not believe in solo fight. It is pertinent to mention here that Khuhro has been elected as MPA from PS-36, Larkana. – DailyTimes