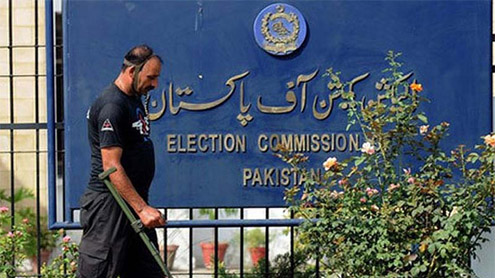 ISLAMABAD: The Election Commission of Pakistan (ECP) launched an enhanced version of E-Ticket service on Monday.

The service was in place for some time, but its enhanced version will enable 80.61 million voters to know details of their polling station, block code and serial number by just sending a message to 8300 from mobile phone. The mobile operators will charge Rs2 per message.Pakistan is the only country in the world to offer this facility to voters.

Member Election Commission (Punjab) retired Justice Riaz Kayani, Member (Khyber Pakhtunkhawa) retired Justice Fazal Ur Rehman and ECP Secretary Ishtiak Ahmed Khan inaugurated the service by pressing a button.The ECP secretary advised voters to avail themselves of the service between May 6 and 10 to avoid any inconvenience. The service would enhance election turnout, he said.

Mr Khan said training of 720,000 polling staff and printing of ballot papers had been completed.“The method of printing the ballot papers is foolproof this time and they are being sent to presiding officers under a security cover of army, police and Rangers.”He said a comprehensive mechanism had been devised to ensure implementation of the code of conduct. Several complaints had been forwarded to the Pakistan Electronic Media Regulatory Authority for action, he added.

Justice Riaz Kayani said elections would be held in a peaceful atmosphere and brushed aside apprehensions of widespread bloodshed on May 11.“All possible steps have been taken to ensure peace. Army, Rangers and police personnel have already been deployed at sensitive and most sensitive polling stations,” he said.The ECP will not provide free transport to voters because such experience had failed in the by-election for NA-151.Meanwhile, the commission again stressed that campaigning could be held up to 48 hours before the election time.

Anyone canvassing within the radius of 400 yards of a poling station will be liable to be fined Rs1,000.The ECP has said that electronic and print media campaigning has to end by midnight on May 9-10.But such restrictions will not apply to radio programmes, including talk shows, attended by experts, analysts, observers and members of civil society. – Dawn