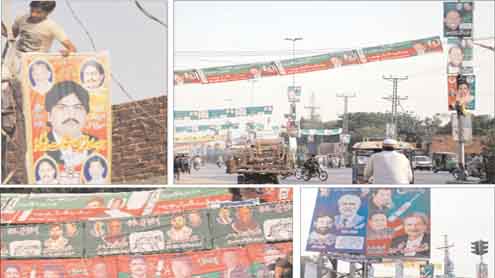 Lahore, at all times a citadel of power wherefrom power is believed to flow, has become a hotbed for rivals contesting the upcoming general election.

Usually known as a stronghold of the Pakistan Muslim League-Nawaz (PML-N), the provincial capital will see some tough contests with the emergence of the Pakistan Tehreek-e-Insaf (PTI). The vote bank of two major parties, the PML-N and the Pakistan People’s Party Parliamentarians (PPPP), is going to break up to fill the bags of PTI candidates.

Experts are not yet certain that who will be securing clear victory in the upcoming polls. The changing situation is not only confusing the experts but also the party leaders, who are diligently wooing the voters with enchanting agendas and tall claims to resolve their problems.The parties will be playing the final round and make last-ditch efforts to persuade voters, as the last week for the campaign is about to begin.

Once again, Lahore will be the focus of all political parties with 13 National Assembly seats. Besides PML-N chief Nawaz Sharif, this city has also remained focus of PPP leaders Zulfikar Ali Bhutto and Benazir Bhutto, who preferred to contest election from here. PTI chief Imran Khan is also not an exception, as he chose one of Lahore’s constituencies to test the waters. Past electoral history reveals that since 1985, the PML-N has been the major party to win elections from this city, with one exception when it secured only two seats in 1988.

Benazir Bhutto and Nawaz Sharif never lost election from Lahore, though Imran Khan was beaten by Sardar Ayaz Sadiq in 2002 polls and now once again he is going for a tough contest from the same rival.The PML-N remained a leading party in 1990, 1992, 1997, 2002 and 2008 elections, by winning eight, seven, eight, four and eleven seats, respectively, from the city, followed by the PPP with one, two, zero, three and two seats, respectively.

Religious parties could only have won a few seats when they were in alliance with Nawaz Sharif in the Islami Jamhoori Ittehad (IJI). Otherwise, these parties, especially the Jamaat-e-Islami, had been unsuccessful despite claiming considerable presence in the city.Some PPP leaders like Aitzaz Ahsan, Jahangir Badr, Miraj Khalid and others were also not consistent to win seats for their party, and will also not be in the run this time.

In this politically enlivening city, all the major political parties are once again flexing muscles to give tough time to the PML-N while trying their luck independently. The PPPP apparently seems to be the third-most popular party in the city, considering the vigorous campaign launched by the PTI. By the time, Samina Khalid Ghurki is the only strong PPPP candidate.The PML-N has a strong team as far as Lahore is concerned, with the fielding of 50 percent of old candidates and the Sharif family members contesting on three seats.

On the contrary, the PPPP has no big name this time, except Samina Khalid Ghurki, Bushra Aitzaz (wife of PPP stalwart Chaudhry Aitzaz Ahsan) and Khurram Latif Khosa. Similarly, most of the PTI candidates are also newcomers.The trend of changing political loyalties is minimal in this cradle of politics, except one worth-mentioning instance of Hammad Azhar, the son of Mian Muhammad Azhar, a former PML-N governor of Punjab, who is contesting election on a PTI ticket.

But, nobody can say of the wave like the one that made PPP founder Zulfikar Ali Bhutto sweep polls in the 70s. This time, the decision of winners or losers will lie with the youth and the female voters. Had there been independent decisions by new voters, the PTI may have given a tough time to the PML-N. But, if the family norms of obeying the elders prevailed then the PNL-N can be successful, owing to the longstanding affiliations of the elders with the Sharifs.

The Sharifs are desperate to keep their power hub intact, while Imran Khan will be trying his traditional bouncers along with in and out swingers to bold them out. The ‘tiger’ will keep roaring during the remaining week, while the ‘captain’s bat’ will be looking for hook shots and sharp cuts across the boundary. Direction of the ‘arrow’ is yet to be ascertained, with only chance to win if the PTI dents the popular vote of the PML-N.

The nation is anxiously waiting the ‘Judgement Day’ despite certain reservations of the PPPP, the Awami National Party and the Muttahida Qaumi Movement in terms of terrorist attacks and not ensuring them a level playing field. But none of the parties, the judiciary and the establishment is in favour of postponing or cancelling the polls. May 11 is not far off and the analyses and predictions will remain rife until the people give the final verdict in the most crucial election in the country’s history. – DailyTimes