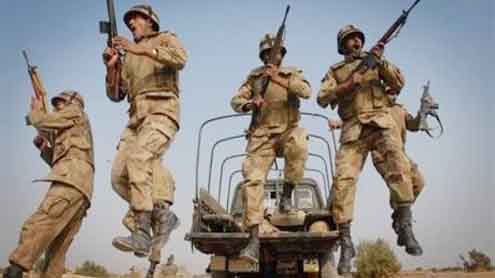 RAWALPINDI: The Pakistan Army will deploy 70,000 troops and use 50 helicopters to help the government maintain law and order during general elections across the country.

“The Pakistan Army will deploy 70,000 troops during the election process in aid of the civil power under Article-245 of the constitution,” said Inter-Services Public Relations Director General Maj Gen Asim Saleem Bajwa while briefing newsmen about the security plan for election-2013. He said that the deployment of troops in Balochistan was to be completed by Thursday night while the deployment in Sindh, including Karachi, would begin on Friday.

The troops have already been deployed in different parts of Khyber Pakhtunkhwa while their deployment in the rest of province will be completed in next two days, he added. Maj Gen Bajwa said that the movement of troops for deployment in Punjab would start on Friday. He said that heli-borne units of the Quick Response Force (QRF) would remain ready in the area to coordinate with the civil law enforcing agencies for maintaining law and order.

The troops will be mobilised by helicopters as well as by roads for security duty, he added. Responding to a question, the ISPR DG said that the armed forces, which were already present in the Federally Administered Tribal Areas (FATA), would also perform election duty along with Levies and Frontier Constabulary (FC). – DailyTimes