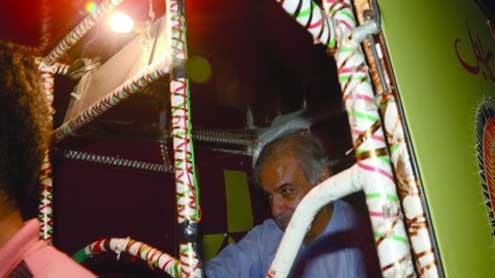 A poorly-organised gathering of the Pakistan Muslim League-Nawaz (PML-N) at Chungi Amarsadhu jammed vehicular traffic for as long as five hours on the Ferozepur Road on Wednesday.

The vehicular flow around Chungi Amarsadhu not only caused inconvenience for the commuters and the area residents but also forced the former Punjab chief minister Shahbaz Sharif to leave his car and travel by a rickshaw.Shahbaz was on his way to address his party’s gathering as a part of his election campaign when he was met by a traffic jam at the Ferozepur Road. It turned out that the traffic jam was caused by his own party’s gathering ahead where illegally parked cars and mismanaged accommodation for the attendees had blocked the road.

After waiting in his car for long Shahbaz realised that he would not be able to make it to the gathering and needed to go back home but there was no turning back.Consequently, he got out of his car, hopped across the road and approached a nearby Metro Bus Station for the bus to take him back to Model Town but the Metro could do him no good.After failing to catch the Metro, he resorted to signaling a rickshaw. PML-N workers and Shahbaz’s guards also joined their leader on the rickshaw ride. Some of them were seen running behind the rickshaw while one of them shared the rickshaw driver’s seat.

Talking to Pakistan Today, Hamid, a passerby who witnessed the entire episode said, “The chief minister will now get to know how much he has helped in easing the traffic flow on the Ferozepur Road.”Ali, a motorist stuck in the traffic jam said, “Why do they organise such gathering if they cannot manage them properly? I have been stuck here for the past one hour and I don’t know what to do. I cannot even abandon my car like this.” – PT